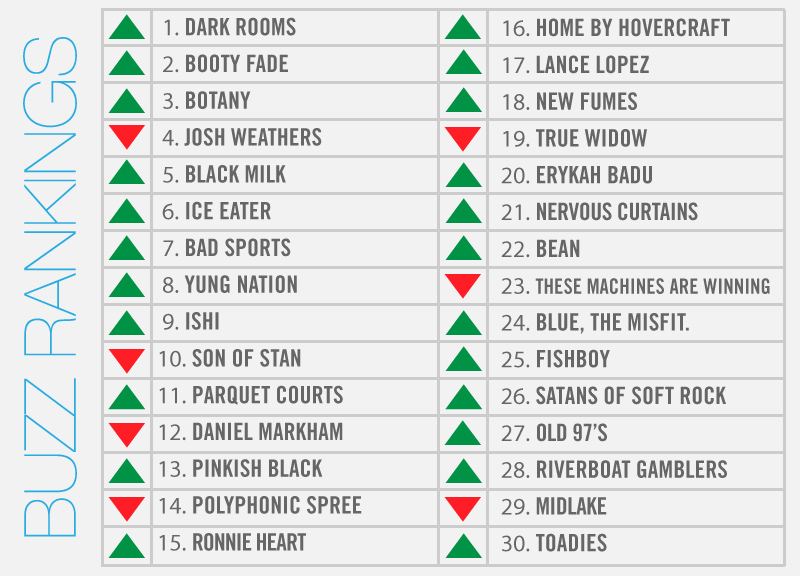 This Week, Dark Rooms Was On The Right Track.

Everywhere we've turned this week, we've been bombarded with coverage of the film Ain't Them Bodies Saints, which, after winning a prize at Sundance back in January, finally earned its wide release over the weekend.

That makes sense: We Texans are a proud bunch, and the Casey Affleck and Rooney Mara vehicle is, first and foremost, intrinsically Texan. What's more, with this film, the Dallas-based director David Lowery has helped given the city its biggest cinematic achievement since — I don't know, when it filled in for a futuristic Detroit in 1987's Robocop?

So, yeah, we're pretty happy the film has received so many enormously positive reviews.

As for the film's soundtrack and score? They're both steeped in North Texas influence, as well. Helping to underpin Lowery's film is a minimal score that comes courtesy of Daniel Hart, whose band Dark Rooms tops this week's Buzz Rankings. Other original bits of music on the soundtrack were provided by North Texans such as Andrew Tinker, Mara Lee Miller, Greg Schroeder and Curtis Heath, among others.

It's also been a big week for DJ Sober/Picnictyme's collaborative project Booty Fade, who will perform at this week's Gorilla vs Bear Fest at Granada Theater. The duo also released their official GvB III mix this week via that event's namesake blog, and the mix features each of the artists appearing on this year's lineup.

Another local artist receiving some national attention this week? Botany, whose upcoming album was previewed on The Fader this week. The publication, which had some nice things to say about the Denton-based artist, also posted the first single from Botany's upcoming album.

And we'd be remiss if we didn't mention Ice Eater, Son of Stan and These Machines Are Winning, who killed it at last week's Red Bull Sound Select event at Three Links. Not ones to rest on our laurels, we also announced our next Sound Select event earlier this week. That show, which will take place on September 20 at Dada, will feature the first Dallas performance by Black Milk since the Detroit-native began calling the area home, as well as sets from rising talents Yung Nation, Blue the Misfit, The Outfit TX and Sam Lao.

Elsewhere, Ishi will perform a free show at The Dram, New Fumes who opened last weekend's My Bloody Valentine show, Home by Hovercraft prepares to leave for tour, and Bad Sports earned some love from Spin.