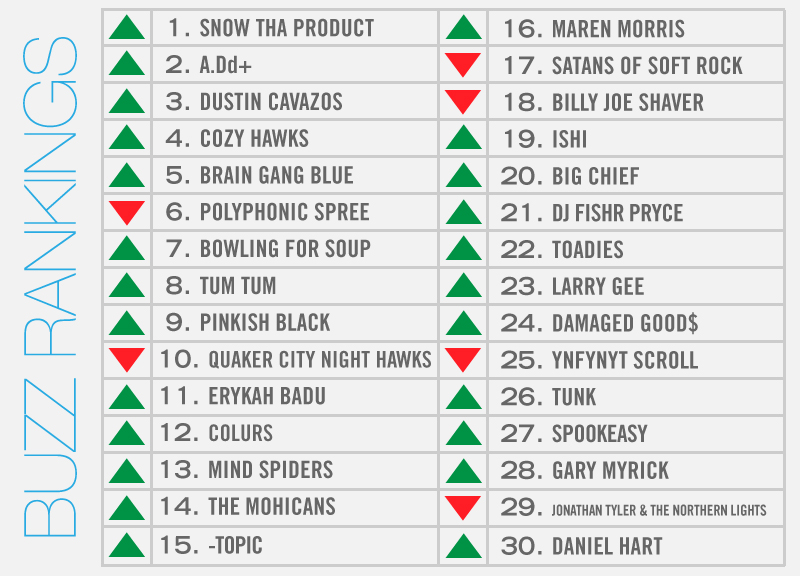 Snow Tha Product Places At The Top Of This Week's List.

Fort Worth rapper Snow Tha Product, who has been slowing inching her way up the rankings for a few weeks now, finally lands the number one spot this week.

That makes sense: The emcee had a prominent placement in Dallas Observer's People issue, which named her one of the area's 30 most interesting characters and even asked her to grace one of their commemorative covers for the issue.

It was this push that helped Snow Tha Product finally start to see some buzz locally. Nationally, though, she's already somewhat of a known commodity, having been signed to Atlantic Records earlier this year on the strength of her YouTube videos, some of which have as many as a million views.

From there on down, local hip-hop artists dominate much of this week's list. A.Dd+, Dustin Cavazos, Brain Gang Blue, and -Topic all fared well after helping to pack The Door last weekend while opening for Schoolboy Q, while perhaps even stealing a little of the veteran rapper's thunder.

Meanwhile, elder statesman of the scene Tum Tum, got the hip-hop community talking with a handful of recent announcements, including his addition to the Texas leg of the Smoker's Club Tour, the release of a new collaborative track with Dorrough and B-Hamp, and work on a new music video.

In other news, the Irving-based pizza chain Chuck E. Cheese's has been making national headlines this week after a semi-controversial rebranding campaign in which they've morphed the formerly baseball cap sporting mouse mascot into a sort of modern rock guitarist. The company has also tapped Bowling For Soup frontman Jaret Reddick to voice the character in advertisements featuring the song “Chuck's Hot New Single.”

Locally, the whole thing, at least judging by our Twitter feed, is being found highly amusing.

Despite cleaning up at last weekend's Fort Worth Weekly Music Awards, landing trophies for Artist of the Year, Best Band, and Rock Album of the Year among others, Quaker City Night Hawks surprisingly find themselves dropping a handful of spots this week. Fellow Fort Worthian Maren Morris was a big winner at those awards as well, taking home the top prize in New Music Seminar's “Artist on the Verge 2012” and performing as part of the New York Music Festival.

We also have to wonder if Erykah Badu would have never come out against the now-infamous nude Flaming Lips video if it would have faded from public consciousness by now. Even though the video has been mostly removed from the internet, the ensuing controversy and public bickering between Badu and Lips frontman Wayne Coyne have kept the video in the limelight. The next chapter in the story found Coyne publicly mulling earlier this week a reshoot of the video with Amanda Palmer in the bathtub instead of Badu. At least we know Palmer's already comfortable baring her breasts online.