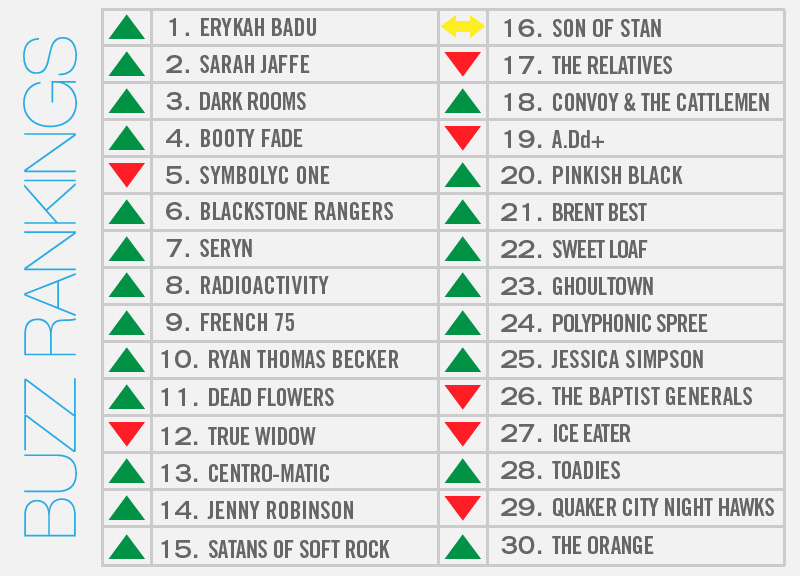 There Was No Killing Badu's Vibe This Week.

What was our biggest takeaway from last weekend's BET Awards? That the booty still don't lie.

Well, that, and the fact that Erykah Badu remains one of the most sought-after artists in the country to work with.

She's just gotta be, right? Why else would both Kendrick Lamar and Janelle Monae tap Ms. Badu for their performances at this year's ceremony? Or, to a lesser extent, why would we tap her as the headliner for our first ever Red Bull Sound Select event? Because she's just the best, that's why.

Anyhow, Badu's double-duty was more than enough to earn the Q.U.E.E.N. of neo-soul (see what we did there?) the top spot in our weekly rankings this week, for her fifth time overall.

Just behind Badu this week is eight-time Buzz champ Sarah Jaffe and Dark Rooms, who ended the week in a dead heat. Coincidentally enough, these two also co-starred in Dark Rooms' new “Dans Le Noir” video, which — ahem — we debuted earlier this week.

In Jaffe's case, though, that was just a portion of her busy week. She also debuted a new track via Spin magazine, announced a new collaborative project with the Kanye West-approved Symbolyc One and the Pixar short she inspired saw continued exposure as Monsters University, the feature film it was paired with, was the No. 1 movie in the country for the second straight time this week.

Sticking with the female front: Jessica Simpson found her name in the headlines once again, admittedly though not for her music. Rather Simpson and her ex-NFL star husband Eric Johnson opted to out-weird Kimye in the baby name department by naming their first son Ace Knute (pronounced Ka-nute) Johnson.