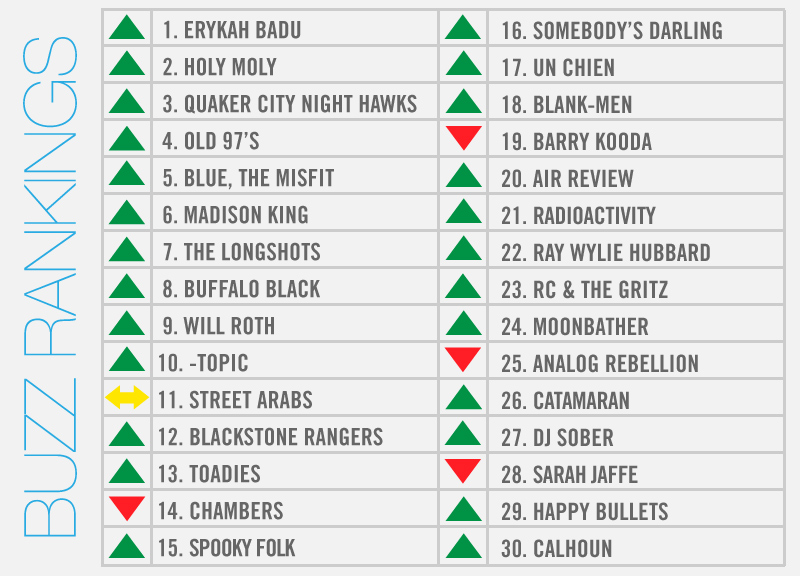 Most time, the artist that winds up topping our weekly Buzz Rankings can point to some sort of calculated effort — releasing an album, playing a big show or generating lots of press for themselves — as the reason for the cause.

Others wind up there by pure happenstance. Some artists are just in the right place at the right time.

Such was the case with Erykah Badu late last week, when she just happened upon a reporter for a local news station doing a live report. For her part, Badu's decision to have a little fun at the reporter's expense, though, subsequently became quite the big viral sensation of the the days that followed.

And, yup, that was enough to earn the Queen of Neo-Soul her seventh No. 1 finish in these rankings — a number only equaled by A.Dd+ and only bettered by Sarah Jaffe's unprecedented eight No. 1's.

Not far behind Badu this week, of course, were a whole bunch of acts who spent considerably more time building their own buzz. For instance? Last weekend's Fort Worth Weekly Music Awards saw Holy Moly taking home an unrivaled seven “Panthies,” including “Artist of the Year.” Quaker City Night Hawks, meanwhile, took home five, including one for “Best Band.”

Then there's another slew of acts that earned recognition from Dallas Observer, which included them on its list of the best local albums of the year so far. Those acts include Blue, the Misfit, Spooky Folk, Old 97's, Moonbather, Madison King, Buffalo Black, Blackstone Rangers and Street Arabs, among others.

As far as big shows are concerned, The Blank-Men, The Longshots and Rhett Miller have been added to this year's Dia de los Toadies lineup, which surely helped their stocks. Ray Wylie Hubbard, meanwhile, will take part in this weekend's annual Willie's Picnic this weekend in the stockyards, explaining his recent rise in press. And, while not necessarily a show, per se, Barry Kooda's Open Carry Guitar Rally will go down this weekend as well — and that's an event that's sure to earn the Nervebreakers guitarist even more shine in the coming days.

Elsewhere: Will Roth kept his reality TV run alive, Radioactivity released a new seven-inch; and DJ Sober is getting ready to celebrate the one-year anniversary of his Travis residency.