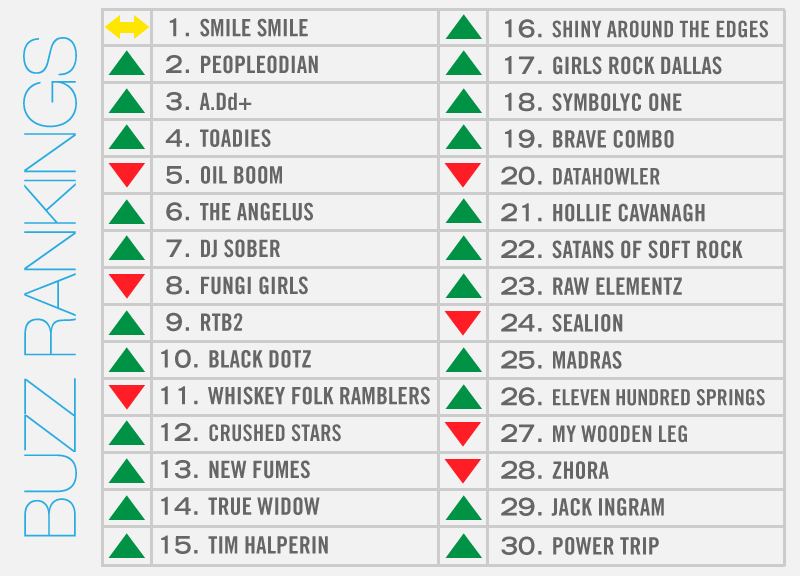 If You Like Smile Smile So Much Why Don't You Marry Them?

For the second week in a row, indie duo Smile Smile tops our rankings. On top of the release of their upcoming album Mary a Stranger and subsequent release show at Granada Theater, which helped them top last week's list, the duo also debuted a brand new music video for that album's title track earlier this week right here on Central Track.

Not far behind Smile Smile are Denton electro-pop outfit Peopleodian, whose last few shows have been promoted as a farewell tour, of sorts, for frontwoman Ally Hoffman, who is moving back to North Carolina next week. There has been much speculation throughout the music community whether or not this news would mean an end to Peopleodian as well, but despite all the scuttlebutt, the Facebook invite for the band's gig this Saturday at Rubber Gloves states that the final show with “Peopleodian's current singer.” Though this would seem to indicate that the band plans to continue on, and we anticipate some continued buzz as friends and fans speculate on who the group will tap as their next front-person.

In less than a week, North Texas stalwarts the Toadies will release Play.Rock.Music., their second original full-length since reuniting in 2006. Several positive reviews of that album have appeared in local media outlets this week in advance of that release. Though the band is on a month-long national tour with their former labelmates Helmet, some early buzz has also started to seethe for their fifth annual Dia de los Toadies festival, which will serve as the band's homecoming show to Texas.

Also making noise this week are perennial local buzz-makers A.Dd+ and DJ Sober, who just got back from a West Coast swing with acclaimed Brooklyn emcee Talib Kweli and will perform this weekend at Gorilla vs Bear Fest II.

Over the past eight years, the Gorilla Vs. Bear has become known nationally as something of a tastemaker, and that, paired with the fact that this year's lineup is somewhat more exclusive than last year's, makes these locals' inclusion on the bill an especially buzz-worthy feat.

Meanwhile, thanks to that big American Idol Live! show at the American Airlines Center this Sunday, McKinney Idol finalist Hollie Cavanagh is being talked about once again. But she's not the only former Idol contestant buzzing this week. Fort Worth's Tim Halperin performed in Times Square last Friday as part of a special “Bands Against Bullying” event, and Arlington's Todrick Hall continued his streak of churning out viral YouTube videos by releasing his latest, which features former *N Sync-er Lance Bass.