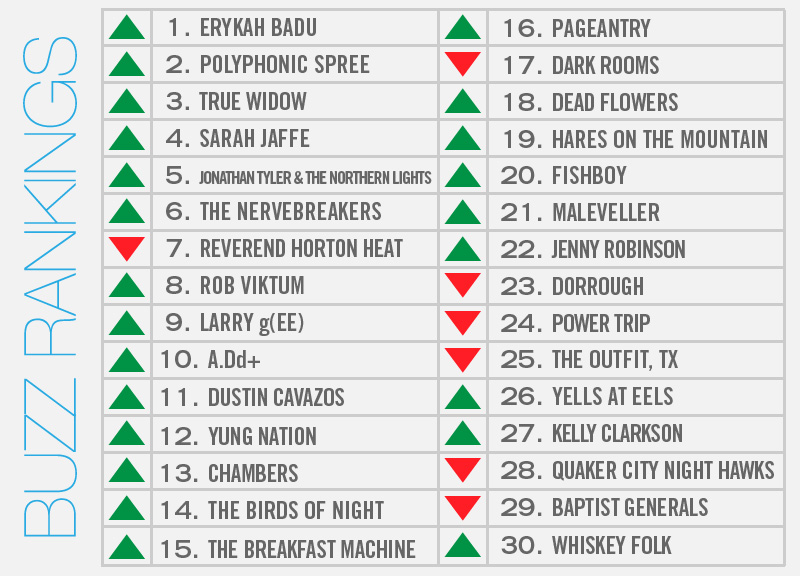 When a seminal local band like '70s proto-punk outfit The Nervebreakers reunites for a one-off show in town and yet still don't crack the top five in our weekly Buzz Rankings, you know it's been one hell of a week for local music.

Indeed, these are good times for music in North Texas. Aside from Saturday's aforementioned Nervebreakers reunion show at Dada, the other massive show of note this weekend comes from Erykah Badu, who tops the list for the second time this month and sixth time overall.

So what makes Badu's Friday night Red Bull Sound Select show so big? For starters, the overwhelming requests we received for free tickets has ensured that the Prophet Bar's big room will be at capacity all night long. And aside from the silk-screened posters, t-shirts, and Good Records gift certificates that early comers will receive, the show will also provide a chance to checkout fellow Rankings-makers Larry g(EE) and Dustin Cavazos.

Also scoring rather highly this week are The Polyphonic Spree, who left for the first leg of a world tour in support of their upcoming Yes, It's True LP. Even cooler? The band's many members have agreed to send us intimate, behind-the-scenes photos and stories while they're gone. We hope you're looking forward to getting to know the inner workings of the Spree and the personalities of its individual members as much as we are.

Speaking of new releases: Several other acts also made their way into this week's rankings thanks to new releases of their own. For instance, after streaming exclusively on Pitchfork for the past week, True Widow released their Relapse Records debut Circumambulation on Tuesday. Also? Sarah Jaffe released two new singles on iTunes this week and Rob Viktum unleashed his latest mixtape on the world.

Meanwhile, Dorrough celebrated the release of his recently-released mixtape at Prophet Bar, and The Breakfast Machine, Descender and Here Holy Spain are all set to follow suit this weekend.

Reverend Horton Heat, on the other hand, made news twice this week, first with the release of a Reverend Horton Heat Sauce brand hot sauce and then by signing on to co-sponsor the first-ever Elm Street Tattoo Convention which will take over Deep Ellum for three days beginning on — you guessed it — Friday, September the 13th.

Elsewhere, Dead Flowers participated in the filming of a new cooking show, Fishboy released an amusing new music video, and Pageantry, Chambers, and Hares on the Mountain were all tapped to participate in Spune's inaugural Canned music festival this fall.