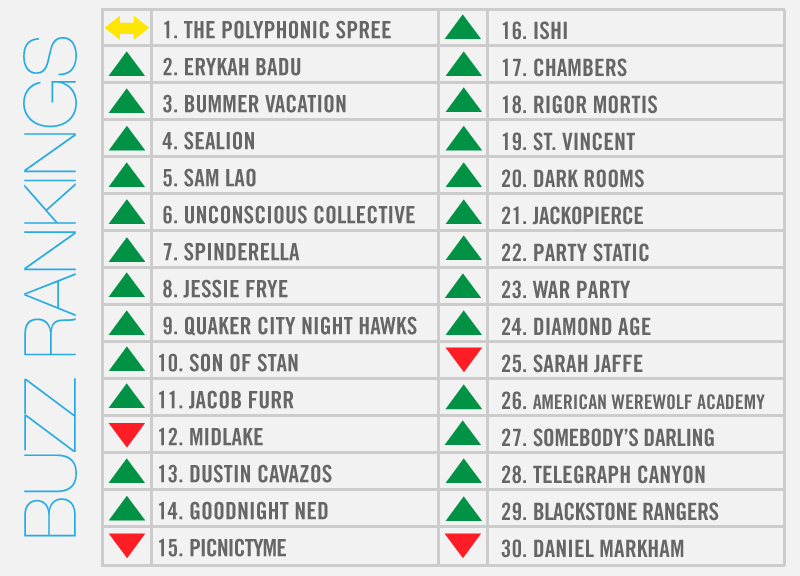 This Week, The Polyphonic Spree's Strength Held Up.

After going over a year without topping our weekly local music power rankings. The Polyphonic Spree has now hit the top spot in back-to-back weeks.

Just as it did last week, the band can this week credit its new remix album and addition to the Untapped Festival as big reasons for its extended reign. More than that, though, the band, which celebrated its 14th anniversary this week, can credit its superb showing last weekend underneath the supermoon on Dada's back patio.

That well-attended evening also provided a big boost to the show's openers, Sam Lao and Quaker City Night Hawks. For her part, Lao, who also appears on Picnictyme's recently released single, will look to carry her bout of buzz into the coming weeks when she opens at Goodnight Ned's album release show on July 24 at Trees.

Other release shows of note this week include Bummer Vacation's pair of digital releases that it'll hold for its Creative Differences LP over the weekend, Sealion's Heavy Fizz release gig that will come as part of next Wednesday's Red Bull Sound Select show, and and Diamond Age's celebration of its own recently released EP this weekend at Dan's Silverleaf.

Rounding things out this week are the handful of artists that released new videos this week, including the Spree, Jacob Furr, Hellyeah and Dustin Cavazos.