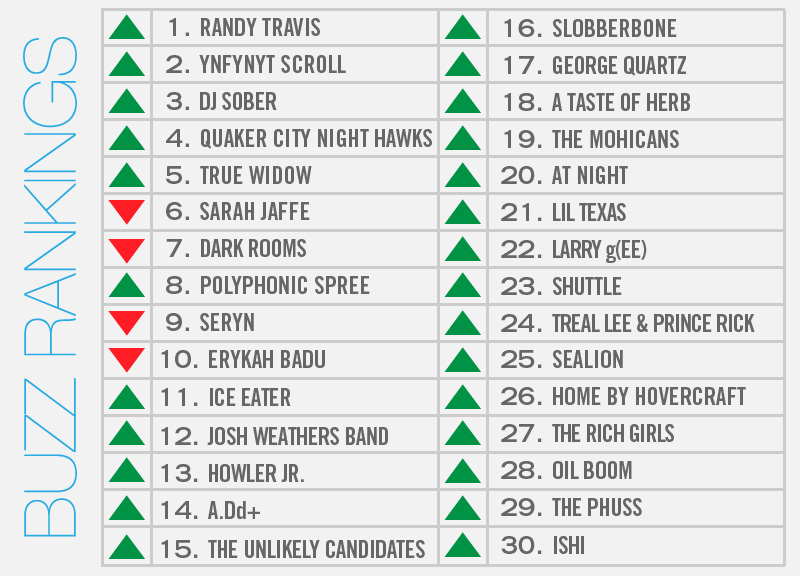 Most weeks, our Buzz Rankings are topped by bands or artists who have big shows that week, ones who've released new albums or videos, or maybe an entity that's received some love from local and/or national media outlets. Most times, these are positive things — almost overwhelmingly so. Every so often, though, the situation arises in which things like topping these rankings or receiving loads of media attention is not a cause for celebration.

That explains this week's top spot going to Randy Travis, who has received an abundance of press coverage both locally and nationally after he checked into the hospital this past Sunday with a heart condition. The country legend has faced an uphill battle this week following surgeries to his heart and brain, and a stroke. Our thoughts remain with the star, who remains in critical condition at the time of this posting.

On a more upbeat note, Dallas DJ culture continued to assert itself into the local music conversation this week as DJ Sober ended his longtime Big Bang residency at Beauty Bar and prepared himself to kick off a new reign tonight over at The Travis. In his wake, it Ynfynyt Scroll and Lil Texas will be taking over Sober's vacated Thursday night Beauty Bar gig — arguably as desirable a gig as exists in the city. All told, these DJ residency shakeups were the topic of much conversation this week as Dallasites prepare to welcome two completely new weeklies to its growing crop of quality recurring options.

The other big story this week? Fun Fun Fun Fest's lineup announcement. Seriously, that sucker was everywhere. Makes sense: Headliners M.I.A., Slayer, MGMT, Jurassic 5 and Snoop Dogg are some pretty big gets for the Austin event that's set to go down in early November. Not to be dismissed is the fact that, among the dozens of other outfits playing over the course of the fest's three-day run, locals Polyphonic Spree and True Widow also joined the bill.