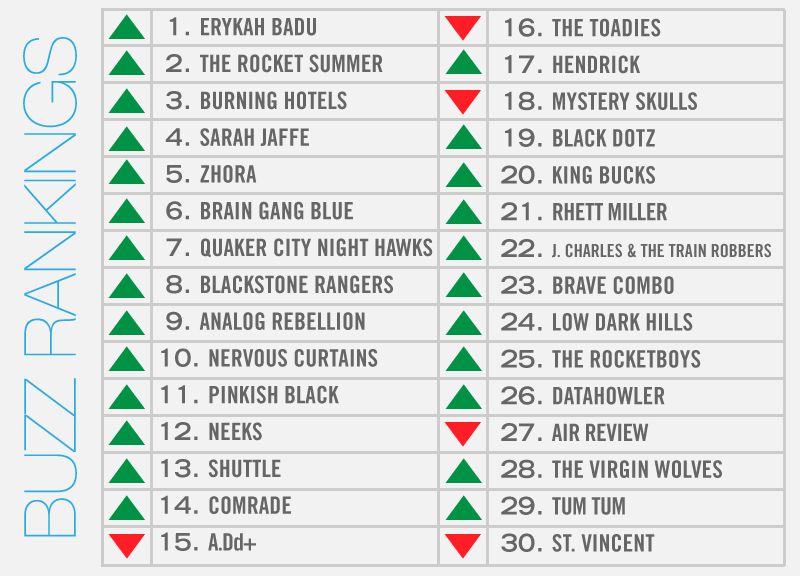 Nobody Puts Badu In A Corner.

The lead-up to the Flaming Lips/Erykah Badu video for “The First Time Ever I Saw Your Face” helped Badu subsequent public “rift” between Badu and Lips frontman Wayne Coyne has earned the pair high-profile mentions in nearly every media outlet in the country.

Whether you believe that Badu's very public derision of Coyne was genuine or yet another calculated effort by two of the industry's most ingenious buzzmakers, the fact that the general public loves a good controversy remains undisputed.

The Rocket Summer comes in a close second this week thanks to the release of his new album, which will be celebrated with a hometown release show next Friday at the Granada Theater. We were at the last TRS album release show at The Granada, which not only sold out, but already had a hoard of pre-teen girls gathering outside of the theater as early as 3 p.m.

In the more immediate future, Blackstone Rangers has a release show of their own this Friday at Bryan Street Tavern.

His fellow alt-country outfit J Charles and the Trainrobbers ended a successful Kickstarter campaign this week, which will help fund the recording of their full-length album, Upon Leaving, that's slated for a late summer release.

The Burning Hotels, who recently played the Homegrown Festival after-party at La Grange, play another high-profile gig this week across the street at Trees. The band also had their single “Always” remixed by Passion Pit drummer/local DJ Shuttle who appears on this week's list as well. Zhora, meanwhile, comes in highly once again thanks to their opening slot for tonight's YACHT show at Dada.

Brain Gang Blue, Quaker City Night Hawks and Analog Rebellion all scored pretty highly thanks to their involvement in a free party Double Wide is throwing this Sunday to celebrate the four-month anniversary of a pretty hip local website. Seriously, though, it's going to be one hell of a party.