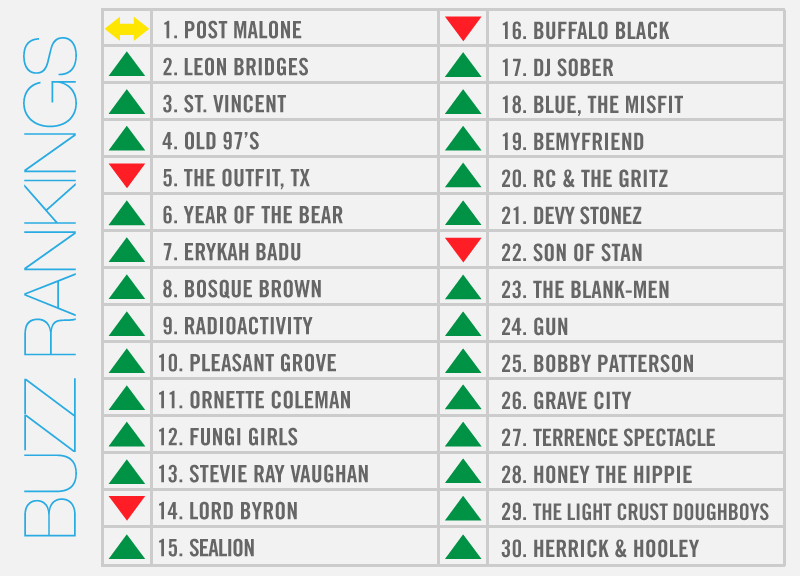 For the second week in a row now, Grapevine-sprung emcee Post Malone finds himself atop our weekly, local music power rankings.

But that's to be expected when you're the most nationally-buzzing local product this side of Leon Bridges — not to mention when your first official Dallas show was a sell-out turn at Trees.

Heck, not even Leon did that his first time playing that room.

Still, not to be outdone, Bridges released yet another new single from his forthcoming debut this week and turned up too on HBO's broadcast of the Rock and Roll Hall of Fame Induction Ceremony over the weekend. It should be pointed out that Oak Cliff product Stevie Ray Vaughan was inducted into the Hall by John Mayer, his brother Jimmie and a whole slew of guitar greats at that ceremony, too.

Other national newsmakers of the week include Fort Worth's Ornette Coleman, who is suing some collaborators over an album he says was never intended for release, and St. Vincent, who shared some beauty tips with the New York Times.

Then there were acts like the Fort Worth Weekly's current cover act, Year of the Bear, which will celebrate the release of a new LP this weekend, and Erykah Badu, Radioactivity, Bosque Brown, Son of Stan, The Blank-Men and Grave City, who each appeared on new releases of their own.

Elsewhere: Pleasant Grove played at pop-up show at Twilite Lounge, which also announced anniversary performances from Old 97's among others set for next month, and Buffalo Black and The Outfit, TX did their thing at last week's Sound Select show.