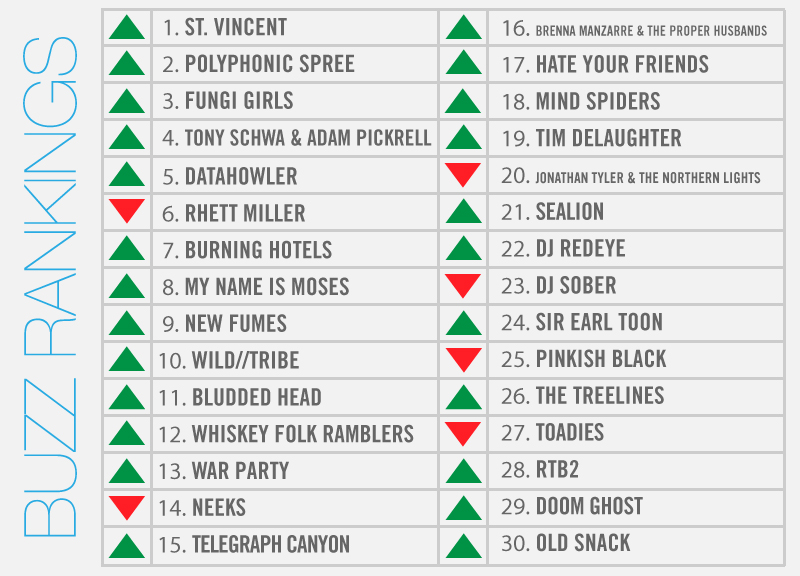 This Week, St. Vincent Got A Giant Amount Of Love.

Last wee, we said that, if the announcement of St. Vincent and David Byrne's collaborative album release been made a little earlier in the day, she would have come in much higher than No. 17. Well, it looks like with the swarm of national attention that album, Love This Giant, received this week, the release of its first single, “The One Who Broke Your Heart,” and the announcement of a tour by the duo in the fall all helped make the Dallas-raised Annie Clark generate more buzz than anyone else in town this week.

But Clark wasn't the only member of the Polyphonic Spree family (past and/or present) that was being talked about in town this week. The Spree themselves take our rankings' second spot after becoming the latest band to participate in The Onion's A.V. Club Undercover series. Their mega-cover of Neil Young's “Heart of Gold” not only gave them a bit of national shine, but it also made for the most people we've ever seen crammed into the A.V. Club's tiny Chicago studio.

Another Spree member, Jessica Jordan, who sings as part of their chorus, got a lot of attention this week for a cover as well. Her rendition of DJ Jazzy Jeff and the Fresh Prince's “Summertime,” released under the My Name is Moses moniker, was so immediately catchy it helped get collaborators New Fumes and Datahowler a little added buzz this week as well. And Spree mastermind Tim DeLaughter has gotten a little attention of his own this week thanks to his Barefoot at the Belmont gig tonight, which is one of his first solo acoustic gigs in a nearly two-decade long career.

Meanwhile, Tony Schwa and Adam Pickrell have revived their old Cool Out Monday concept, moving the old Cavern staple to the Gin Mill, much to the rejoicing of service industry folks and dancefloor junkies who have long lamented the lack of opportunities to get down on Mondays. And DJ Redeye, it was announced this week, will be changing the landscape at The Beauty Bar and the newly re-opened It'll Do Club on Friday and Saturday nights respectively with his weekly residencies. DJ Sober, meanwhile, continues to find a spot in the rankings, despite the fact that his frequent collaborators A.Dd+ missed the boat for the first time in the list's history.

With the Fort Worth Weekly's music awards showcases going down this Sunday, many bands from that side of the Metroplex were riding some momentum this week as well. Bands like Fungi Girls, Burning Hotels, Wild//Tribe, Whiskey Folk Ramblers, War Party, Telegraph Canyon, Brenna Manzare and the Proper Husbands, Pinkish Black and Doom Ghost are all nominated for awards this year by the Fort Worth alt-weekly.