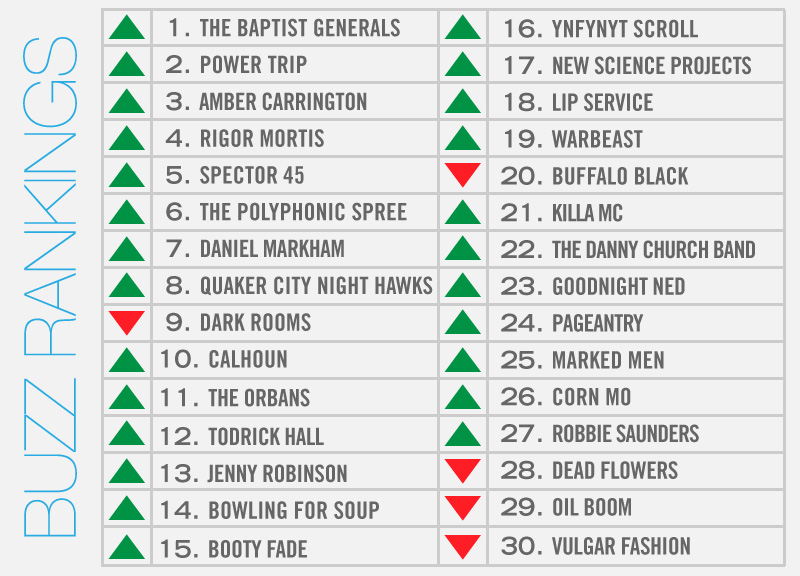 The Baptist Generals Are Back On Top. Yes, Again.

Welp, for the third time in the past four weeks. The Baptist Generals are the buzzingest band in town.

We're sure you're familiar with their story by now, but how about a quick recap anyway?

Generals frontman Chris Flemmons records a lo-fi record in 2003 and calls it No Silver/No Gold. He plays a show at SXSW and gets signed to a label in Europe. Subsequently, the band is picked up by Sup Pop here in the States. He records a followup for Sub Pop in 2005 but later scraps it. Then he puts the band on the backburner for a while as he tries to save buildings on Fry Street and to get his then-branded-as-NX35 festival off the ground. Then the band releases Jackleg Devotional to the Heart. their first album in 10 years. and becomes the “next big thing” once again. Now the band, currently touring the country playing support to The Mountain Goats, finds themselves the subject of Dallas Observer's cover story this week.

Just a couple of points behind the Generals this week are hardcore favorites Power Trip, who released their Southern Lord debut Manifest Decimation on Tuesday. On the disc, the band even accomplishes the near-impossible task of matching the intensity of their thrillingly wild live shows — according to Pitchfork, at least.

Other new releases of note this week include a new album from Denton's Daniel Markham, whose Ruined My Life just might end up as one of the top five local releases of the year, and new ones from Killa MC and Jordan Higginbotham, both of which were reviewed by the Star-Telegram this week. Also getting in on the new-release game: Robbie Saunders, who will debut his new live backing band at his City Tavern show this week, plus Cat People and Pageantry, who will each celebrate their feats with shows in Denton over the weekend.

North Texas found a way to honor the lives of some fallen local musicians this week, as well. Last night, Jonathan Buchner's Spector 45 documentary made its official debut with a pair of well-attended showings in Deep Ellum. In the film, friends, family members, bandmates and scene-folk remember the lives of Spector 45 members Frankie Campagna and Adam Carter, each of whom committed suicide in early 2011. Meanwhile, tomorrow night, the life of Rigor Mortis guitarist Mike Scaccia will be celebrated with a special birthday tribute show at Trees. On the bill are legendary metal outfits featuring close friends of the guitarist, such as Warbeast, Rotting Corpse, Hammer Witch and Goatwhore.

Elsewhere, Amber Carrington was finally booted from The Voice just one episode shy of the season finale, Ynfynyt Scroll was named the No. 3 “net musician” in the country by Dazed Digital, and, after creating the country's latest hashtag-related dance craze, Arlington's Todrick Hall has once again found himself going viral.