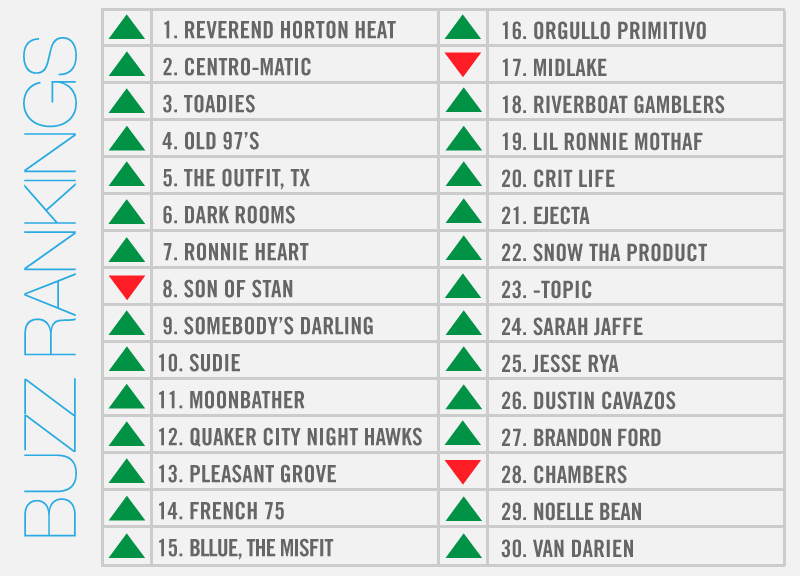 With last night's Black Flag show at Dada, the Elm Street Music and Tattoo Festival kicked off its five-day takeover of Deep Ellum — an event that'll see 45 of the world's best punk bands and tattoo artists doing their thing all weekend long.

And for its part as the fest's namesake, the Reverend Horton Heat earned itself just its second-ever No. 1 finish in our weekly, local music power rankings. The band will also perform at Trees this Saturday as part of the festival, followed by frontman Jim Heath performing a solo electric set on Sunday evening at Three Links.

Other acts earning spots on this week's list thanks to recent festival/showcase announcements include Ejecta, which will appear at this year's Gorilla vs Bear IV, and the Toadies, the Old 97's, Somebody's Darling, Quaker City Night Hawks and Pleasant Grove, who combine to make up the first half of this year's announced Dia de los Toadies lineup.

Then there's the contingent of local acts celebrating new releases this week. To that end, Centro-matic will perform a pair of Dallas shows this weekend in honor of its recently-released eleventh LP, Denton's Moonbather will do the same for its debut EP tonight at Good Records and Van Darien will follow suit Saturday night at Double Wide.