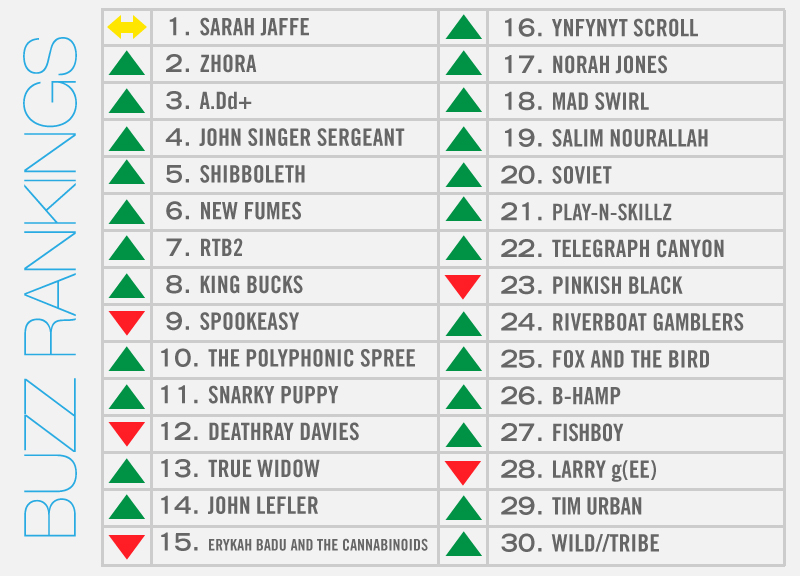 Sarah Jaffe and Her Body Keep On Winning. When Will It End?!?!

Riding a massive wave of local and national press that included a Dallas Observer cover story and a write-up in The New York Times, the debut of a music video on national television and the biggest show in town this week, Sarah Jaffe retains the top spot in our weekly buzz rankings for an unprecedented third straight week. Speaking of that Saturday night Jaffe show at the Granada: With opening acts John Singer Sergeant and Zhora also appearing in the top four this week, that's almost certainly going to be one of the biggest all-local bills in quite some time.

It's not just about those three bands this week, though.

First-timers Shibboleth make their list debut in such a high spot thanks to a new iPhone app called Mr. Toast. The game, which involves a piece of toast with arms and legs running around avoiding obstastacles, contains three new Shibboleth tunes — the band's first batch of new material in four years. News of the release was accompanied by the announcement of an upcoming EP from the quirky instrumental act.

Meanwhile, space-pop quartet Spookeasy released their debut full-length Faux Show last week, which was produced by Eric Harvey of Spoon. That release was celebrated with a sold-out bill at La Grange — an impressive feat considering bands like Olivia Tremor Control and Brian Jonestown Massacre were playing nearby that night as well. Let Me See It, the debut EP from local producer Ynfynyt Scroll, also caused a spike int his week's rankings.

In other news, RTB2, long considered one of the most highly regarded acts in town, teased their upcoming release via a YouTube clip that showed a turntable playing a few seconds of the band's test acetate. The Stuart Sikes-produced record marks the first batch of non-eight-track-released material from the band in roughly three years. Another extremely rare record was prepared for release last week, too: Daniel Huffman of New Fumes assisted Wayne Coyne in collecting blood samples and injecting a run of about 15 double-LPs containing the actual blood of every collaborator from the Flaming Lips' Heady Fwends record (minus Nick Cave and Yoko Ono). Earlier this week, Huffman told Central Track he estimates the discs will eventually sell for around $5,000 dollars a piece.

Deathray Davies, Telegraph Canyon, and Riverboat Gamblers were tapped as openers for big national acts coming through town — Olivia Tremor Control, Deer Tick, and Social Distortion, respectively. The King Bucks, on the other hand, were supposed to open for Reckless Kelly at The Granada last weekend, but ended up headlining a free show at the venue when that band had to cancel last minute.