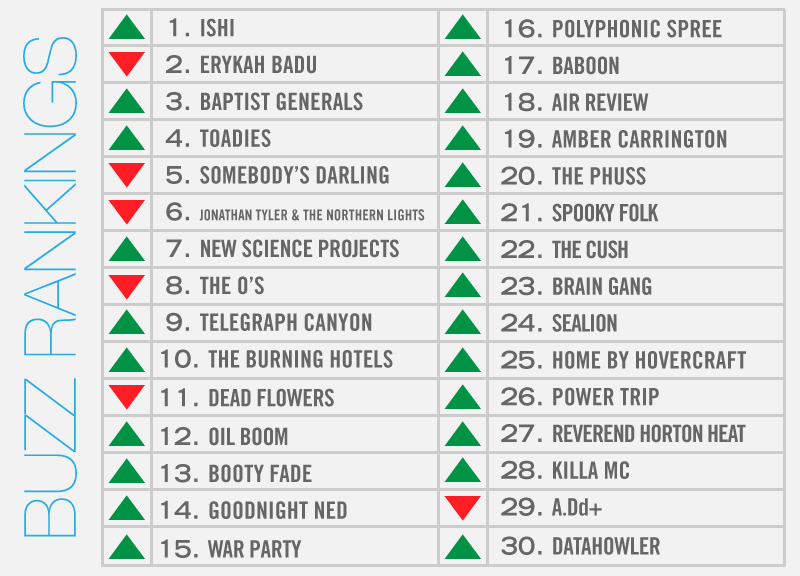 This Week, Ishi Wound Up On Top.

For Ishi, the road from their 2010 debut to their just-released follow up has been a long, rough one.

It's one that mastermind John Mudd discussed with us in detail just prior to the release of Digital Wounds last month.

But, for the most part, all the extra band drama with this group seems to be behind the band at the moment, as it finally celebrates the release of its new album with performances tonight at Good Records and tomorrow night at Granada Theater. And helping them do so are Sober and Picnic's collaborative project, Booty Fade, who have managed to rack up heaps of buzz for themselves in their own young career.

Just a point behind the wounded soldiers, Miss Erykah Badu — or Badula Oblongota as she's called in the new Janelle Monae video — narrowly missed topping the rankings for a second straight week. Released this week, the pair's new video has been a pretty formidable buzz machine of its own, appearing on Pitchfork, BET, and pretty much everywhere else music videos are still shown these days.

Not to be forgotten, Chris Flemmons and his fellow Baptist Generals bandmates released a video of their own this week. We won't spoil the video's ending by revealing what the gormandizing bankers are chowing down on in the new clip for “Fly Candy Harvest,” but we will go as far as to say we've heard the Generals' new Jackleg Devotional to the Heart album in its entirety and that it just might be the best local release anyone will put out all year. As proof, we'll offer up the fact that the terrific cut in question doesn't even appear on the album.

Somehow, though, we make it all the way down to this week's No. 4 spot before the week's biggest newsmakers appear.

Yes, The Toadies' have managed to make news this week several different times. For one thing, the lineup to their sixth annual Dia De Los Toadies festival was announced yesterday and features bands like The Burning Hotels, The O's, Oil Boom, Baboon and The Cush, among others. Before that, though, the band's frontman Vaden Todd Lewis performed at the Texans For West benefit show last weekend, which helped earn over $30,000 for the victims of the tragedy in West. Jonathan Tyler and the Northern Lights, Somebody's Darling, The O's, and Goodnight Ned also appear on the list this week thanks to their participation in that Texans for West bill. And in still more Toadies news, drummer Mark Reznicek made headlines in a few national music rags when he revealed the new alcohol-fueled superhero comic book he's releasing via Dark Horse Comics.

Elsewhere, Telegraph Canyon released their first new recorded material in several years, Paul Slavens is set to perform a live score to Lon Cheney's silent film The Hunchback of Notre Dame this weekend with the help of Home by Hovercraft, Rockwall's Amber Carrington survived another week on The Voice and New Science Projects celebrated the release of their new Hard On LP with a show at Rubber Gloves over the weekend.