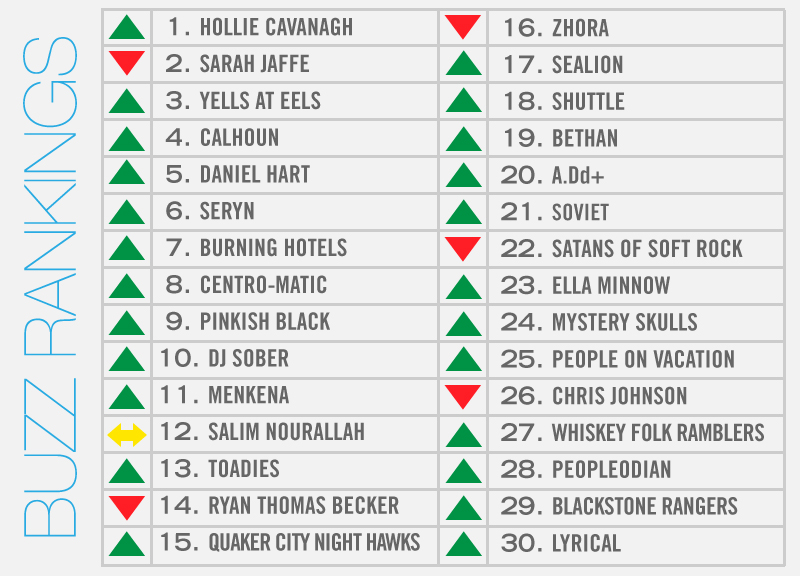 Hollie Cavanagh, You Are Not The American Idol.

And then there were three.

On last week's episode of American Idol, British-born McKinney resident Hollie Cavanagh found out she would not, in fact, be this season's winner. Maybe she'll take topping this week's rankings as a sort of consolation prize. Sorry, Hollie, it doesn't come with a recording contract or anything.

You do, however, get the tip of our proverbial cap, though. So there's that.

Not far behind Cavanagh this week is local powerhouse Sarah Jaffe, who has singlehandedly dominated the rankings for a month solid. Then comes Yells at Eels, who caught more than just the attention of unsuspecting passersby this week during an afternoon of guerilla-style street performances at the West End DART station, Winspear Opera House and City Hal.

Calhoun shows well this week thanks to the addition of their brand new bassist, The Ticket's own Danny Balis. They'll perform with Seryn during this weekend's Arts Goggle in Fort Worth. More notably, the performance by the two bands will be the first time patrons will be allowed inside the new Live Oak Music Hall & Lounge, which is holding a soft opening on Saturday.

That same night, the long-teased Daniel Hart album The Orientalist will finally earn its release with a performance at Dada headlined by the one-time Polyphonic Spree violinist. It's also the night that Denton club Rubber Gloves celebrates its 15th anniversary with performances by Pinkish Black, among others.

Other notable releases and release announcements this week helped Menkena, Ella Minnow, the Satans of Soft Rock and Blackstone Rangers earn spots in the week's list. In other news, Passion Pit drummer Nate Donmoyer reminded us all he was a local when he DJed last weekend at Rio Room under his Shuttle handle.

Oh, and Soviet got folks talking again with — get this — yet another drastic shift in styles and lineups. The latest shakeup finds the band as a trio now, performing a blend of emo and sludge metal with frontman John Spies now on drums.