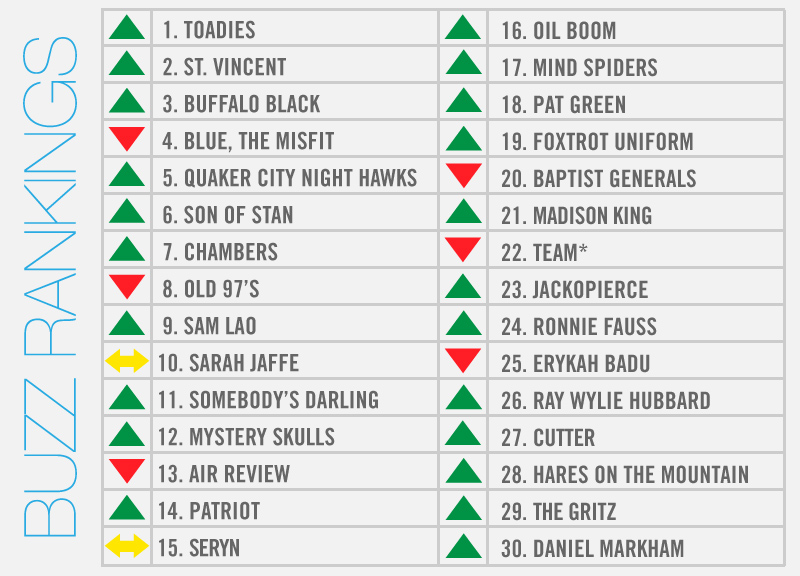 This Week Treated The Toadies Well.

This past weekend, another one of the best days in Dallas came and went. And once again, in its fifth year, this year's Homegrown Festival did not disappoint.

And for their part in headlining the thing, the local heroes in the Toadies very much helped the thing live up to its hype — and then some. As much as we like to joke about it, the band's seminal album, Rubberneck, which the band performed front to back for the first time in front of a hometown crowd at this fest, is still a pretty damn great record.

Rose-colored tint of our fanboy glasses notwithstanding, there was still enough hype surrounding this performance to help the band reach the apex of our weekly local music power rankings for its fourth time.

The Toadies was far from the only band in town that experienced a bump in buzz thanks to its part in a local festival, though. For the most part, most of the acts in this week's rankings owe their positions to festival performances. Sarah Jaffe, Seryn, Goodnight Ned, The Phuss, Son of Stan, Calhoun, Mystery Skulls, Sam Lao, and the Baptist Generals took part in that same Homegrown bill last Saturday. And this coming weekend will see Quaker City Night Hawks, Ray Wylie Hubbard, Ronnie Fauss, Patriot, Jackopierce, Air Review, Oil Boom, Foxtrot Uniform, the Fox & the Bird, Ice Eater and TEAM* performing at the Fort Worth Music Festival. Likewise, Party Static, Cliffs of Insanity, RTB2, Andrew Tinker, Jonathan Tyler and the Northern Lights, Bad Mountain, and Nervous Curtains are some the locals appearing during this weekend's three-day Richardson Wildflower Festival. Meanwhile, Pat Green and Madison King are but a few of the locals that'll appear at this weekend's two-day Addison Fork and Cork.