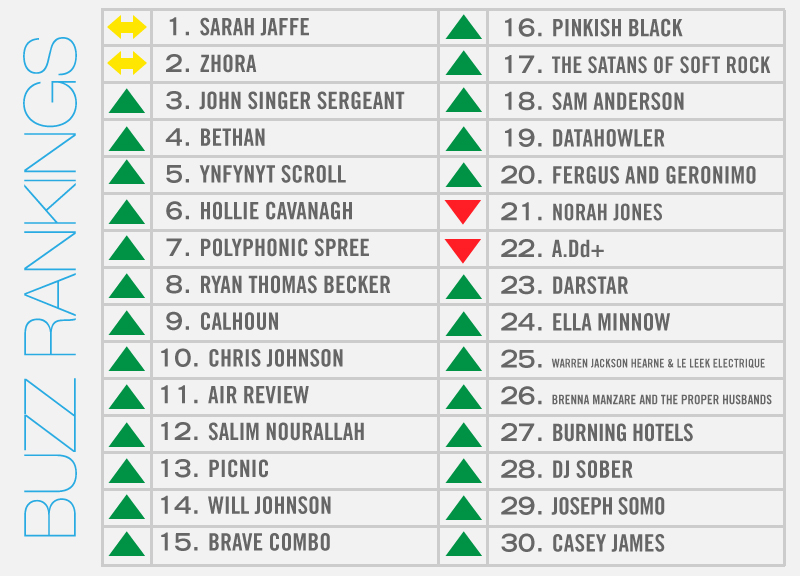 When Are You Guys Going To Get Tired Of Sarah Jaffe?

After her sold out show this past weekend at the Granada Theater, it's hard to imagine a version of the buzz rankings this week that doesn't include Sarah Jaffe in the top spot.

But, seriously though, after four straight victories, it's hard to find anything else to say about the singer. And if she continues her recent domination of the local media, we may be forced to enact a TRL-style temporary retirement of Jaffe from this list.

That being said, Jaffe did indeed have much stronger competition in the voting this week — a week that turned out to be an unusually strong one for women in the rankings.

For instance? Following just a few points behind Jaffe in this week's rankings is Zhora, who opened that aforementioned show at tThe Granada. John Singer Sergeant, who is not a woman, but also performed on that same bill, was only one point behind Zhora in our voting.

Other female presences high in the list include McKinney native and current American Idol contestant Hollie Cavanagh, who sang three songs on this week's episode of the show as one of the final four contestants. Also this week, Spune released Chapter 1, Bethan's seven-song debut EP. That band, of course, is female-fronted as well, helmed by former Novaak member Jessi James. Other female acts appearing in this week's list: Norah Jones, Darstar and Brenna Manzare & The Proper Husbands.

Meanwhile, Ella Minnow and Satans of Soft Rock make the list largely due to the announcement of release shows for their upcoming albums in the coming days. And, after four years of teasing his new solo album, P.P.T. expat Picnic finally released a single this week called “Then Dust.”

Along similar lines, Ynfynyt Scroll, after months of teaser singles, finally released a proper EP last week. That release was celebrated with a well-received black light party at Beauty Bar.. Polyphonic Spree also performed a triumphant concert in an intimate setting, this time in Fort Worth, a part of the Metroplex they rarely visit.

Lastly, Calhoun got a bump in the rankings due to the announcement of their newest member: The Fort Worth Weekly reported this that Danny Balis, producer of 1310-AM The Ticket's afternoon drive time show “The Hardline,” would be joining their ranks as their new bass player. Balis has since confirmed that report.