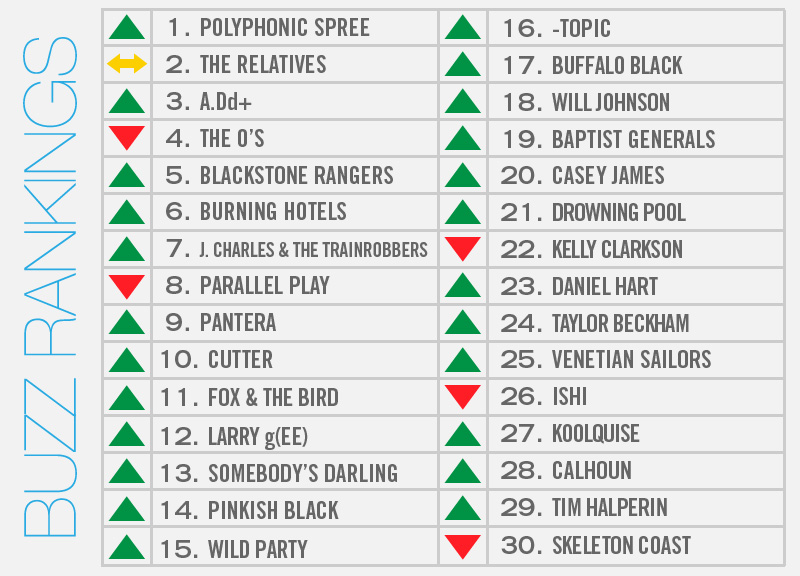 It's True, This Week The Polyphonic Spree Are Back On Top.

For once, Tim DeLaughter's oft-buzzing indie-rock symphony didn't need the help of a leaked track from their upcoming disc Yes, It's True or an appearance on network television or at a major festival to get an extra boost this week.

Being the biggest name on this week's second batch of Homegrown Festival announces, it seems, was all that was needed this week to help the Spree once again find themselves atop our rankings.

Other bands receiving a bump this week based on their involvement with that May 11 affair include The Relatives, The O's and Somebody's Darling, who'll all perform in that annual bash alongside the previously announced Larry g(EE), Zhora, Madison King, and J. Charles and the Trainrobbers.

It was also announced this week that, a few weeks prior to that show, The Relatives will also be appearing at Good Records' day-long Record Store Day celebrations alongside such names as Shinyribs, Myopic, Bashe, Blackstone Rangers, Whiskey Folk Ramblers, Cutter, A.Dd+, Vulgar Fashion, War Party, Dark Rooms, Unconscious Collective and Track Meet.

And Parallel Play, who helped organize last weekend's Big Folkin' Festival, find themselves buzzing again this week thanks to their involvement in yet another local festival. They're one of 70 performers appearing at this weekends Deep Ellum Arts Fest. Brave Combo, Fox and the Bird, Playdough, Clint Niosi are but a few of that fest's artists who also find themselves in this week's rankings.

Television was also a big source for local band buzz this week. Aside from reunion rumors/controversy from former frontman Phil Anselmo, Pantera will also be featured on this weekend's episode of VH1 Classic's Behind the Music: Remastered. And Fort Worth heartthrob and former American Idol contestant Casey James will be returning to the program that launched his career this week to perform a new song. A couple of fellow local Idol contestants were in the news as well: Tim Halperin released an acoustic cover of Imagine Dragons' “Radioactive,” and Kelly Clarkson announced a co-headlining tour with Maroon 5 frontman Adam Levine, which will find the pair performing at Gexa Pavilion on September 22. Meanwhile, 17-year-old Dallasite Taylor Beckham took one step closer to national stardom by impressing Usher on the most recent episode of The Voice's blind auditions.

Elsewhere, Fort Worth indie-rockers Calhoun announced a new album slated for release this summer, and so too did Centro-matic's Will Johnson, who'll soon put out a new album with collaborator David Bazan under their Overseas moniker. The O's similarly made it known that their third full-length, Thunderdog, will be out on April 16, and the Baptist Generals began taking pre-orders of their upcoming Jackleg Devotional to the Heart LP.