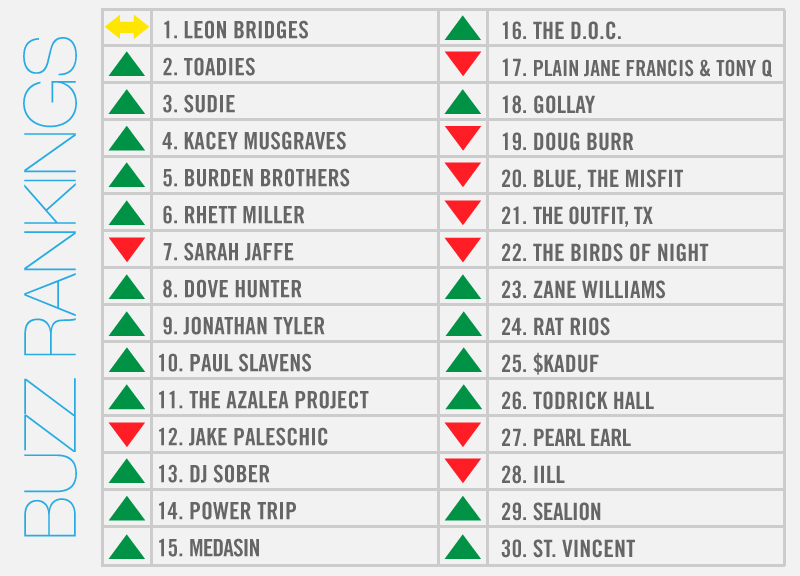 This Week, Leon Bridges Was The No. 1 Pick.

For the second week in a row, the fifth time this year and his sixth time overall, Leon Bridges tops our weekly, local music power rankings.

By now, seeing Bridges in the No. 1 hole should surprise absolutely no one.

This week's noise, however, comes for a pretty cool reason. Just as Heisman Trophy-winning quarterback Marcus Mariota gets set to join an NFL team at tonight's draft, the QB also finds himself the subject of a two-minutes-long Beats By Dre ad featuring the previously Bridges unreleased tune “River.”

We expect you'll be hearing that one a lot in the coming weekend. We reckon, too, you'll continue to keep seeing Bridges top these here rankings fairly often for the foreseeable future.

Just behind Bridges this week was the Toadies, who charted on the strength of this week's Dia de los Toadies festival announcement, which also followed the release of the band's second beer, the Martin House-brewed Bockslider. Paired with those news bits came a few other interesting announces — like a new Toadies album called Heretics, the fact that their festival will feature the first shows from The Burden Brothers and The Buck Pets in many a year, and that the fest will also feature a 20th anniversary celebration of Hagfish's Rocks Your Lame Ass LP.

Just behind the Toadies this week is Sudie, who was the subject of a feature in this month's D Magazine.

Other local features this week included pieces on the up-and-coming producer Medasin and high school rock act The Azalea Project, both on the Observer's music blog. Also? Paul Slavens found his way onto Sports Illustrated's site thanks to some well-timed Rajon Rondo shade.