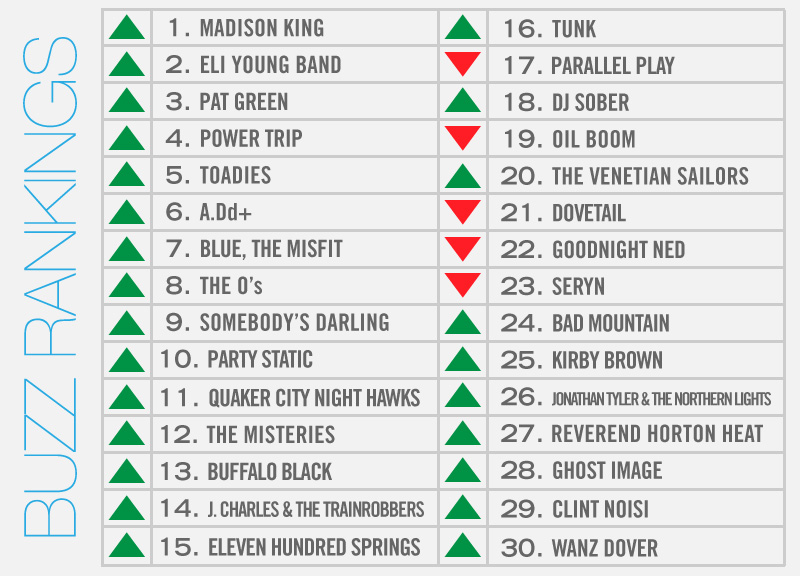 It's been a couple months now since Madison King held a listening party for her then-upcoming sophomore effort Onward & Upward at Twilite Lounge, where she also happens to bartend.

Since then, the disc has made its way to seemingly every critic in town.

Hell, even we weren't immune. Just this morning, we went so far as to say that the album's closing track, “Saved by a Son of a Gun,” is “the most raw and rowdy thing she's put out to date.”

The biggest compliment send Kind's, though, just might have come from Old 97's frontman Rhett Miller, who tweeted yesterday his approval of King while linking to Dearmore's piece:

That's some high praise, to be sure.

It was enough, anyway, to earn King her first-ever trip to the top of our weekly local music power rankings.

Needless to say, King's album release show tonight at Trees — one that'll feature opening turns from Dead Flowers and Dovetail — should be a pretty crowded deal.

But also expecting to play to big crowds this weekend are Eli Young Band and Pat Green, both of which are expected to play in front of some 40,000 people at this weekend's free March Madness Music Festival. The former, we should point out, also performed at one of Conan's locally filmed shows this week.

And also on the small screen — like, computer screen small — this week was Power Trip, which, for whatever reason, appeared on yet another PBS web segment.

Elsewhere: A.Dd+, Tunk, Ghost Image, and Blue, the Misfit each released new worthwhile tracks; The Misteries made its live debut; and Buffalo Black landed a placement in an upcoming Spike Lee joint.