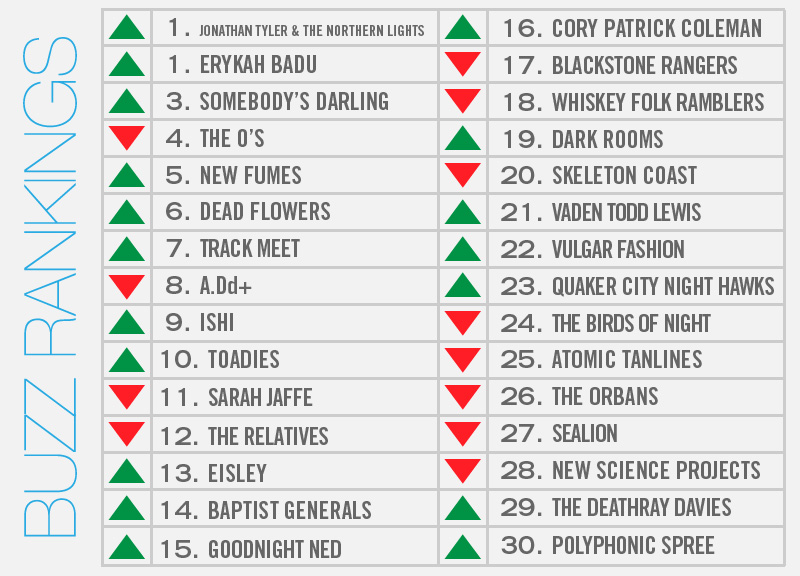 This Week, Erykah Badu and Jonathan Tyler Share The Spotlight.

It was bound to happen again.

Almost eleven months to the day in which The Relatives and Old 97s gave us our first-ever Buzz Rankings tie, we find ourselves in a similar situation this week.

This time through, it's Erykah Badu and Jonathan Tyler and the Northern Lights that find themselves sharing the top spot — albeit for very different reasons.

On Monday, R&B “It” girl du jour Janelle Monae released a teaser track from her upcoming sophomore record — and it's a good one, too. Maybe good enough to challenge Daft Punk's “Get Lucky,” as the unofficial jam of the summer. Really, it's that good. And in a featured role on the cut, Badu's vocals can be credited for helping put the song over the top.

The win, we should note, marks the third time in which Badu has topped the rankings since last June. Also worth pointing out is the fact that her backing back, The Cannabinoids, released their second beat tape on Saturday which, fittingly enough, also happened to be 4/20. Somehow, we don't think that was necessarily a coincidence.

Sharing the spotlight with Badu this week are blues rockers Jonathan Tyler & The Northern Lights, who are headlining the very quickly organized Texans for West benefit show this weekend at the AT&T Performing Arts Center's Strauss Square, in which the moneys raised will help those families affected by the recent tragedy in West, Texas.

Also appearing on that bill is Somebody's Darling, who, interestingly enough, finished the week just a single point behind JT&TNL and Badu for that top spot.

It's been quite a busy week for that band, too, with gigs at both Untapped: Fort Worth and that Dead Flowers album release show that will forever be known as Three Links' first-ever sellout. Add to that Sunday's performance at the Dallas International Guitar Festival, tonight's Barefoot at the Belmont gig and, a show at Magnolia Motor Lounge this weekend, and it's clear that this is a band putting in work.

Other folks making this week's list thanks, at least in part, to their participation in some of the shows we've just mentioned include Vaden Todd Lewis of the Toadies, The O's and Goodnight Ned, who are all playing at the Texans For West show; Bravo, Max!, who appeared alongside Goodnight Ned and Somebody's Darling at that Dead Flowers show; and Sarah Jaffe, The Orbans and Skeleton Coast, who all performed at Untapped.

We also found out this week that New Fumes will be appearing on The Flaming Lips' upcoming Stone Roses cover album, and that Eisley plans on touring later this summer, provided they earn enough dough via Kickstarter to buy a vehicle that is both large and safe enough to entrust with the bandmembers' four new babies.