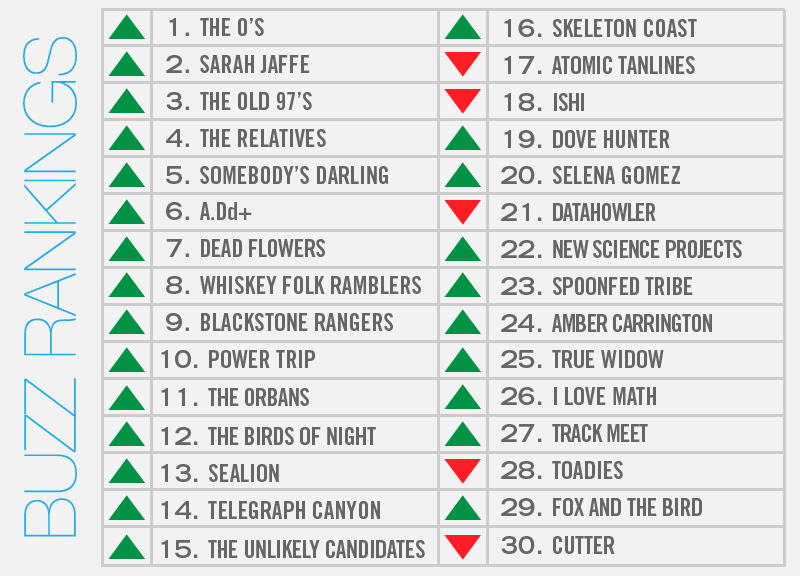 This Week The O's Thunderdog Their Way To The Top.

Like the booming sound of their trademark kick drum, The O's were pretty hard to avoid this week.

Since their formation back in 2008, the band has released a pair of well-received albums and accrued a massive local following. While the band prepared themselves to release their third full-length album tomorrow night at Granada Theater, they made sure the phrase “Thunderdog” was on everybody's mind.

And, as we learned through the pair's countless interviews, album reviews and local feature stories this week, the phrase is not just the name of the twosome's new album, but also the name of their signature drum, as well as a nonsensical verb the duo likes to toss around at will. So, no surprise here: On the cusp of that big release show with Telegraph Canyon and I Love Math tomorrow night, The O's simply thunderdogged their way to the top of the local buzz mill this week.

Not far behind, perpetual festival darling Sarah Jaffe finds herself once again in that all-too-familiar charge of bringing local crowds to big-money outdoor shows. With the help of Paste magazine's national publicity push, Jaffe and Co. should have no problem ensuring this Saturday's Untapped Festival is extremely well-attended — despite the fact that it's being held on one of the busiest local music days of the year.

Also helping Ms. Jaffe in her efforts at Untapped? Fellow locals Somebody's Darling, The Orbans, Skeleton Coast and Dove Hunter, who are all also appearing at the festival.

But, as we mentioned before, Saturday is going to be packed to the gills with local music activity. For one thing, just about every band appearing in this week's rankings will be performing an in-store at Good Records, Recycled Records, Bill's Records and Tapes, Doc's Records and Vintage or CD Source as part of this year's Record Store Day festivities.

Plus, a few artists are even taking part in the now-annual tradition of releasing special edition vinyl as part of the celebration. The aforementioned Sarah Jaffe and the Toadies, for instance, have a pretty unique collaborative seven-inch hitting indie record shops this weekend. So do The Old 97's, who are finally releasing a long-shelved collaboration they recorded with legendary outlaw Waylon Jennings back in their Too Far To Care days.

In other release news, Dead Flowers will pull double duty on Saturday, performing their For You album release at Three Links just hours after doing a set at CD Source for Record Store Day. Meanwhile, The Birds of Night are two-thirds of the way through their three-city string of release shows for their sophomore LP, and Datahowler, Sealion, Ishi, Spoonfed Tribe and New Science Projects all announced album release shows in the coming weeks for their latest efforts as well.

Elsewhere, Rockwall singer Amber Carrington won the first battle round on The Voice, The Unlikely Candidates signed a deal with Atlantic and Selena Gomez that announced her upcoming tour will include a November stop at American Airlines Center.