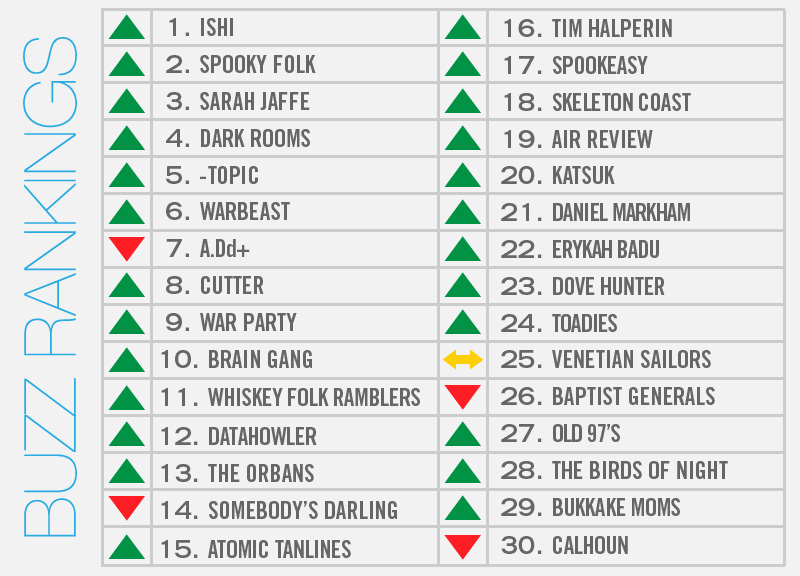 Each week, we take a survey of the local music scene and try to determine which acts in town are really putting in work and seeing it pay off. Which bands have the most intriguing shows coming up? Which bands are getting the most press around town? Which bands have accomplished the most notable feats of late? Based off these criteria, three of our music writers submit a list to be weighted and compiled into a master list revealed each week in this here space. We like to think it's fairly revealing. Check out our Buzz Rankings archives here

Ishi's one of the biggest acts in the region. It's not even really a matter of opinion at this point. It's a fact. Those guys are simply unavoidable.

And, as we learned earlier this week, frontman John Mudd doesn't really care what you think of that.

And, now, after a multi-year gap between albums and months of delays for their sophomore effort's initially scheduled release date, the band finally released Digital Wounds. Say what you will; the initial reviews we've read have all been pretty enthusiastic. And it's that combination of positive reviews and an eager fan base that has boosted the neon-inspired post-folktronic bunch to the No. 1 slot in our North Texas music buzz rankings this week.

Likewise, it's been about three years since Denton favorites Spooky Folk took the area by storm with their undeniable, self-titled debut. You know the one we're talking about. That disc, of course, spawned local “hits” like “Bible Belt” and proved itself one of best local releases of the last decade. So one can imagine the type of buzz the band has earned the past few months as rumors grew of the band's impending breakup. Those rumors, however, were put to rest earlier this week when the band announced that, despite frontman Kaleo Kualoku's upcoming move to Denver, the band would, in fact, remain intact. They still plan on releasing that long-awaited follow-up record later this year, too.

Close behind those two, the undisputed queen of these rankings, Sarah Jaffe, finds herself in the No. 3 spot following a handful of announcements. Among them? That she had a song appear in an episode of The Following, that she's teamed with the Toadies to cover a PJ Harvey song as part of an exclusive Record Store Day 7-inch release, and that she's heading out on the road this summer with Why? First, though, she'll appear as part of this year's Untapped Festival which, thanks to involvement from Paste, has been growing into something of a nationally-recognized concert.

Other than Jaffe, The Orbans, Somebody's Darling, Skeleton Coast and Dove Hunter are the local acts that will be sharing the stage with bands like Deer Tick and Justin Townes Earle at Untapped on Saturday, April 20. An official pre-party was also announced by the magazine this week. It will be set at Fort Worth venue The Live Oak, and official ticket holders to the fest can catch acts like Daniel Hart, Air Review and more for free.

Elsewhere, A.Dd+ and Datahowler were announced as the final two additions to this year's Homegrown Music and Arts Festival, Brain Gang and -topic packed them in over at Dada, Erykah Badu made a guest appearance on the recently released Tyler the Creator solo album, Tim Halperin put out a ridiculous Texas Rangers-themed parody of Macklemore & Ryan Lewis' “Thrift Shop,” and The Birds of Night celebrate the release of their sophomore record.