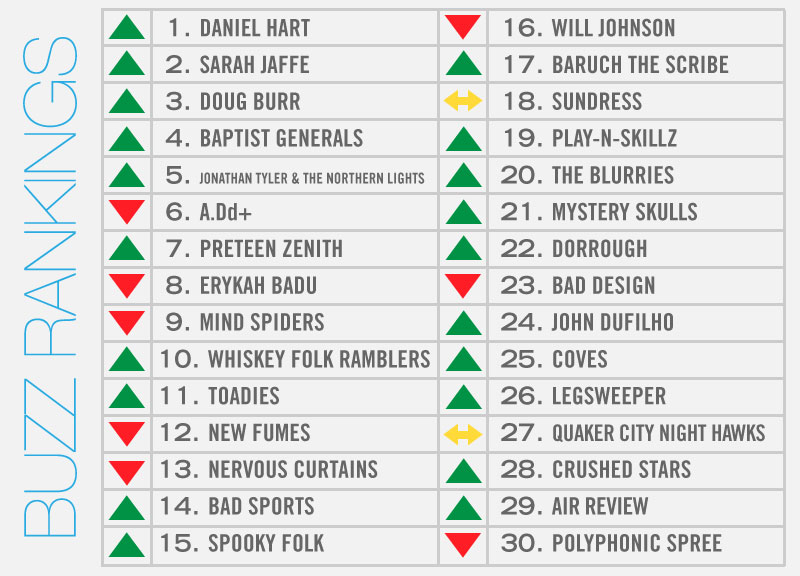 In a bit of a surprising turn, Dallas-based violinist Daniel Hart takes the top spot this week without ever having appeared on this list in weeks prior. But that shouldn't come as an enormous shocker: Hart has been traveling as a touring member of Other Lives as they've been on the road opening for Radiohead, who, in case didn't hear, performed at the American Airlines Center earlier this week.

Behold the power of Radiohead.

In other news, Hart was also announced as the headliner of DXDW, a day-long post SXSW show celebrating local music at City Tavern on Sunday, March 18.

Hot on Hart's tail this week is local darling Sarah Jaffe, who not only released this week “Glorified High,” the first new single from her hotly-anticipated upcoming sophomore album The Body Wins, but was also featured on Daytrotter along with Will Johnson. Johnson also appears in this week's list, although a few spots lower than he did link –
last week, despite beginning a tour with one of his new indie-folk supergroups, New Multitudes. Doug Burr, meanwhile, appears to riding high from his recently released 7-inch single and his in–store performance last weekend at Good Records.

The Baptist Generals also make a dramatic first-time appearance on the list thanks to a rare live performance on Main Stage 2 at this weekend's 35 Denton festival, along with the announcement they've been working on a new album. Several other bands such as Coves, The Blurries, Bad Design, Whiskey Folk Ramblers, Bad Sports, Spooky Folk, Legsweeper were also helped out in the rankings by the anticipation of their 35 Denton fest sets.

Meanwhile, Preteen Zenith debuted a new track featuring Erykah Badu this week, the Toadies announced a pair of new EPs, and Nervous Curtains' new release and addition to the Bro Fest lineup — and all that appears fresh in people's minds as well. A few more surprises from this week's list: Play-N-Skillz, Dorrough, and Crushed Stars.

Also worth noting is the staying power of A.Dd+, Badu, Mind Spiders, Bad Design, New Fumes and the Polyphonic Spree who have remained on the list for several consecutive weeks now. Interestingly enough, the Spree is also Tim Delaughter's second band in this week's list — although they're intriguingly rated much lower than his newer upstart Preteen Zenith.