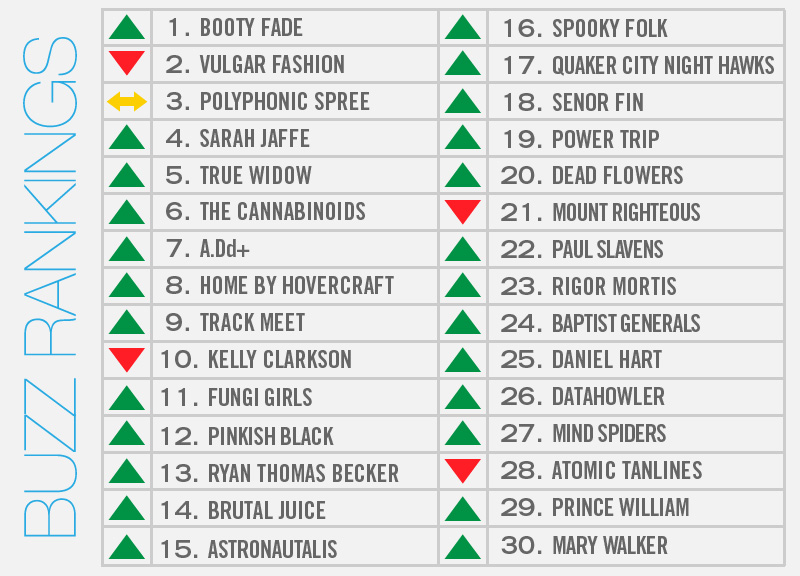 This Week's Rankings Fade To Booty.

Each week, we take a survey of the local music scene and try to determine which acts in town are really putting in work and seeing it pay off. Which bands have the most intriguing shows coming up? Which bands are getting the most press around town? Which bands have accomplished the most notable feats of late? Based off these criteria, a couple of our music writers submit a list to be weighted and compiled into a master list revealed each week in this here space. We like to think it's fairly revealing.

There's just something in the air that feels a bit different as everyone begins to prep for another great 35 Denton year, isn't there? Surely, you've noticed at least some of the advanced coverage that the fest has received already from nearly every publication in town, yes?

Hell, there's been so much love for local music already this week, it wouldn't have been a big stretch at all to expand this week's rankings to a Top 50 or even more.

That being said, the act at the top of this week's list surprisingly isn't playing 35 Denton at all.

Still, we can't say Booty Fade doesn't wholly deserve the title of the most-buzzing act in town this week — even if, thus far, they've mostly earned the title on the merit of their recorded works. Tomorrow night, however, the duo of DJ Sober and Picnictyme will put their undeniable dance-floor bangers to the live test as they make their performing debut at the It'll Do Club. Judging from the strengths of these musicians' other projects, though, we're guessing Booty Fade will deliver the goods.

Just below Booty Fade on this week's rankings is last week's buzz champs Vulgar Fashion, who had another strong showing once again this week, following up last week's Pitchfork writeup with mentions in D Magazine's Frontrow blog and locally based international taste-making site Gorilla vs. Bear.

As with a majority of the other acts below them on the list, this duo will perform at this weekend's 35 Denton festival. That list includes such acts as Sarah Jaffe and The Cannabinoids, whose special collaborative set on Saturday's main stage is perhaps the most prominent and buzzed-about slot held by local act up at 35 Denton all weekend.

Another of those more talked-about acts heading into 35? Ryan Thomas Becker, of course. He'll perform at least four official showcases (that we know of, anyway) at this year's fest. Meanwhile, Spooky Folk, who will have a new track debuting on that Gutterth comp that's coming out tomorrow will perform at the festival this weekend, too, in what will be one of the last chances area fans will have to see the band before frontman Kaleo Kaualoku moves to Colorado in the near future.

Dead Flowers, on the other hand, gave us the privilege this week of debuting the stream of their upcoming record For You, which proved itself to be a gritty powerhouse of a debut.

Elsewhere, Kelly Clarkson thrilled a crowd of 5,000 or so fans at Verizon Theatre over the weekend, Rigor Mortis guitarist Mike Scaccia was inducted into Decibel Magazine's Hall of Fame, Senior Fin will play hosts to a much-hyped backyard barbecue this weekend, and Baptist Generals will hold a special listening party for their upcoming album at Dan's Silverleaf during 35 Denton.