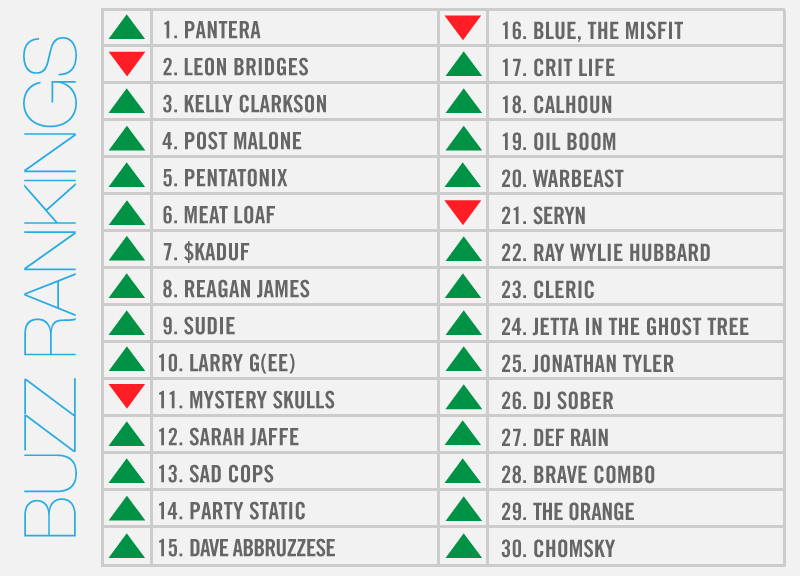 This Week, Pantera Rose From The Grave.

Let's not sugarcoat this: This was not a hugely active week in the local music scene.

Now, how quiet were things? Well, a shitty, misguided “prank” made at Dimebag Darrell's grave by a guy that used to be in a band from Indiana was far and away the most buzzed-about story of the week.

For what it's worth, though, the tasteless Tumblr post that spurned the whole story was far and away the talk of the metal world, nationwide. Still, it's kind of an unfortunate way for the local metal heroes in Pantera to earn their first-ever No. 1 spot in our weekly local music power rankings.

On a happier note, Leon Bridges continued his global takeover, touring through Europe, getting added to a Gorilla vs. Bear showcase at SXSW and premiering his first-ever music video.

Likewise, Oil Boom and Def Rain earned their spots in this week's rankings thanks to new music videos of their own. And, though not his own video per se, Mystery Skulls' music did find its way into a new Victoria's Secret spot.

Meanwhile, on the night before the release of her new single “Piece By Piece,” Kelly Clarkson dropped by The Tonight Show to turn in a hilarious “History of Duets” sketch with Jimmy Fallon. She also helped Arlington a capella group Pentatonix earn its spot in the rankings when she announced the outfit as openers on her tour.

Other big names in the news this week: Meat Loaf, who will return to his alma matter, Thomas Jefferson High, for this weekend's homecoming; ex-Pearl Jam drummer Dave Abbruzzese, who is wanted by authorities in Denton; Warbeast, who will play the first-ever Fort Worth Metal Fest; Reagan James, who dropped a new single; and Ray Wylie Hubbard, who released a stream of a new track he penned with Jonathan Tyler.