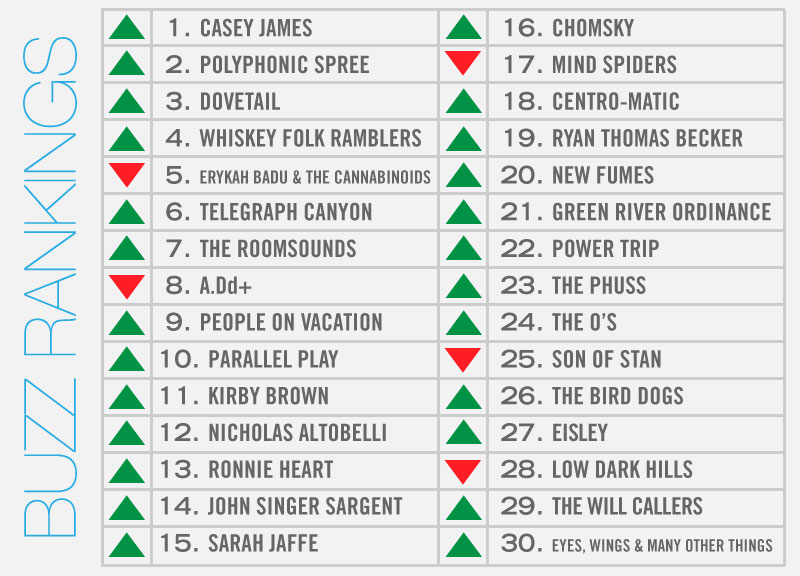 Last week was already a pretty big one for Fort Worth native and former American Idol contestant Casey James. For starters, his long-awaited, self-titled debut album was released on March 20. Then, this past Friday, he celebrated with a big show at Billy Bob's in Fort Worth.

But the news coming down earlier this week that his album debuted in the No. 23 slot on the Billboard 200 charts really makes this week a huge one for James.

James' first appearance on the list also comes during a big week of shake-ups. Note that, for the first time ever, no bands kept the same ranking from the week prior.

Following James are Polyphonic Spree and Dovetail, who each had pretty huge shows this past week. The crowd The Spree packed into Dan's made the place look almost as crowded as the stage was as the Denton show kicked off the second phase of their “You + Me” tour. Dovetail's headlining slot at The Granada over the weekend also marked the release of their debut full-length.

Then a slew of performers such as Whiskey Folk Ramblers, Parallel Play, Kirby Brown, Nicholas Altobelli, Ryan Thomas Becker, The O's, The Roomsounds and The Will Callers all benefit in the rankings due to their participation in this weekend's inaugural Big Folkin' Festival in Deep Ellum, in which 31 local country and folk bands will perform on five stages at The Prophet Bar and In Accord. The Roomsounds also released an album of their own this week.

Also appearing consistently high on the list are perennial local favorites like Erykah Badu & The Canabinoids, A.Dd+ and Mind Spiders, all of whom never seem to leave the list.

Ronnie Heart, Sarah Jaffe, Son of Stan, John Singer Sargent and The Phuss are all riding high off of singles released of their upcoming records. The Phuss' disc was actually produced by The Toadies' Vaden Todd Lewis, and it will be dropping next week.

The John Singer Sargent disc also boasts a pair of tracks featuring Sarah Jaffe, as well. Meanwhile, her “Glorified High” song was chosen as NPR's Song of the Day earlier in the week.

Lastly, Centro-matic, The Bird Dogs and Low Dark Hills all seem to have made the list due to their inclusion on this year's Homegrown Fest bill.