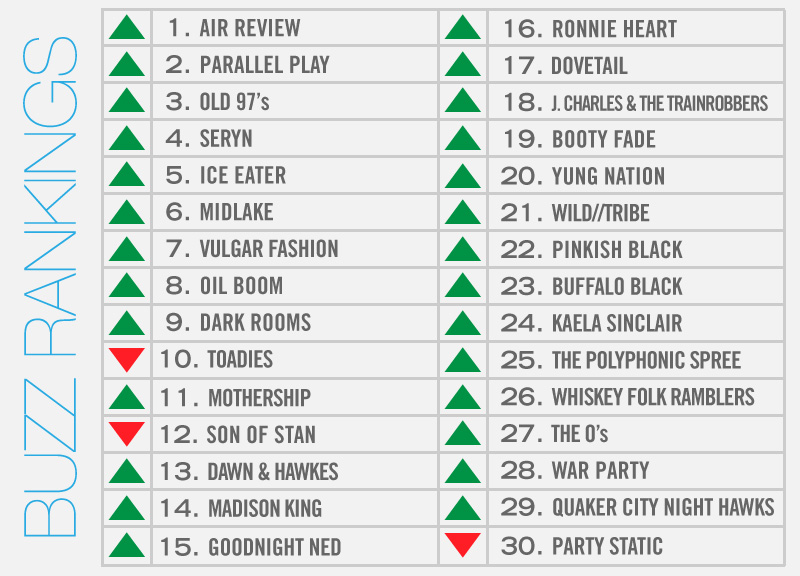 Hopes Are High For Air Review This Week.

Tonight — or perhaps, more accurately, early tomorrow morning — the rest of the country is set to find out what we in town have known for quite some time now: Air Review's most recent album is pretty darn flawless.

Or in other words: The Dallas indie rock outfit is set to appear on tonight's episode of Last Call With Carson Daly, where it'll also debut portions of its new music video.

Of course, that's only part of the equation. Also helping Air Review land atop our weekly local music power rankings for just the second time ever — and the first time in over a year — were announcements that the band will be a part of this year's Fort Worth Music Fest lineup, as well as this year's Record Store Day celebration at Good Records. Joining Air Review on both of those bills is Fort Worth's Ice Eater, which was also the subject of this SXSW behind-the-scenes feature on our site this week.

Also getting a bump this week thanks to those announcements was Quaker City Night Hawks, and TEAM*, who'll also appear on that Fort Worth Music Fest lineup. Midlake, Kaela Sinclair, Oil Boom, Foxtrot Uniform, Madison King, Son of Stan, Dovetail, Buffalo Black, Nervous Curtains and Pinkish Black, meanwhile, will all play at the Good Records bash next month.

Before either of those events, though, The Prophet Bar will host its third annual Big Folkin' Fest this Friday and Saturday. That fest, of course, will feature 40 mostly local, mostly Americana-ish acts, a large percent of which earned spots in this week's rankings as a result. The biggest bump from the fest, per usual, went to Parallel Play, as its members were at least partly responsible for helping to organize this year's two-day affair.

Elsewhere: Old 97's appeared in The New Yorker, as well as this week's episode of the Comedy Bang Bang podcast; Wild//Tribe helped re-launch the RBC club; Dawn & Hawkes introduced Shakira to the greatness of Stealer's Wheel on NBC's The Voice; and Oil Boom earned a shout out from NPR.