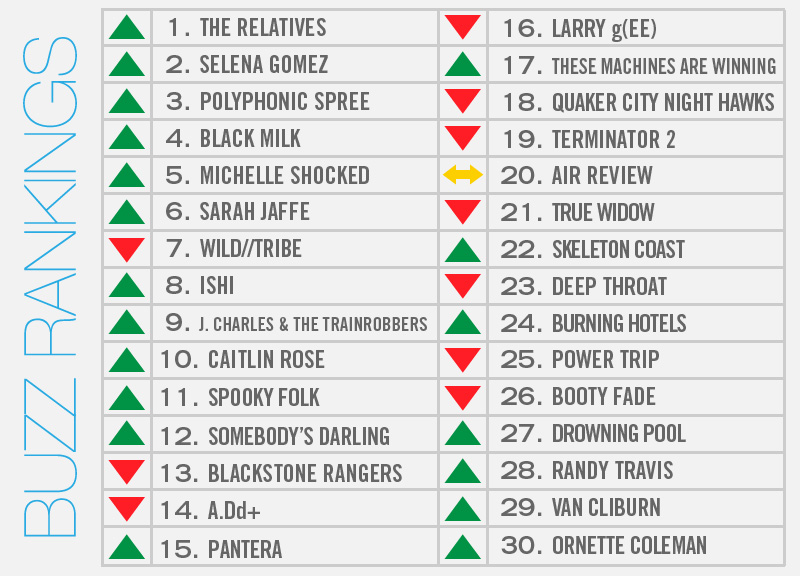 This Week, Hanging Out With The Relatives Isn't So Bad.

Though in the '70s they were thought of as gospel royalty, the legacy of The Relatives was somewhat in doubt as recently as a few years ago.

Led by brothers Rev. Gean and Rev. Tommie West, the group released a handful of singles and shared stages with acts like The Staple Singers and The Mighty Clouds of Joy. But, then, in 1980, they disbanded.

And, before long, they became a forgotten memory.

But then something glorious happened in 2009: A couple of Austin cratediggers found some of the psychedelic gospel-funk singles the Relatives recorded so many years ago and convinced the group to reunite. And, ever since, the group's been playing well-received showcases throughout Texas.

Then, last month, with the help of producer Jim Eno, The Relatives ensured that their legacy would endure. They released their first-ever full-length, The Electric Word, via Yep Roc Records. And, tomorrow night, this legendary Dallas group will finally celebrate that album's release at The Kessler.

It's a nice story, to be sure — more than enough cause to justify the group's position at the top of this week's rankings.

But The Relatives did have some tough competition this week.

Coming in at a very close second in this week's rankings is Spring Breakers star and Grand Prairie's Own Selena Gomez, who has been making the publicity rounds this week in advance of that film's premiere tomorrow night. Highlights from her promo appearances include performing a duet with Jimmy Fallon called “Mario Kart Love,” and making Dave Letterman double over with laughter after she caught the late-night king off guard by saying that she'd made her ex-boyfriend Justin Bieber cry.

Then there was Dallas-born Michelle Shocked who, true to her last name, made international headlines following an anti-gay rant at a San Francisco concert earlier this week. Much of the singer's tour has been cancelled following the global controversy.

Meanwhile, her fellow Dallas ex-pat Caitlin Rose has been receiving her share of international press as well. In Rose's case, however, glowing reviews of her sophomore album The Stand-In are the culprit. That disc, which deftly fuses country, folk and pop has been praised by everyone from Rolling Stone to Pitchfork in the States and The Guardian in the UK.

Elsewhere, Pantera bassist Rex Brown released a tell-all autobiography, Wild//Tribe announced their split, The Polyphonic Spree had a track from their upcoming album in this week's episode of New Girl, Ishi and A.Dd+ opened for Snoop Dogg at this year's sold-out Greenville Avenue St. Patrick's Day Parade After-Party, and Fort Worth legends Van Cliburn and Ornette Coleman were added to The National Recording Registry of the Library of Congress.