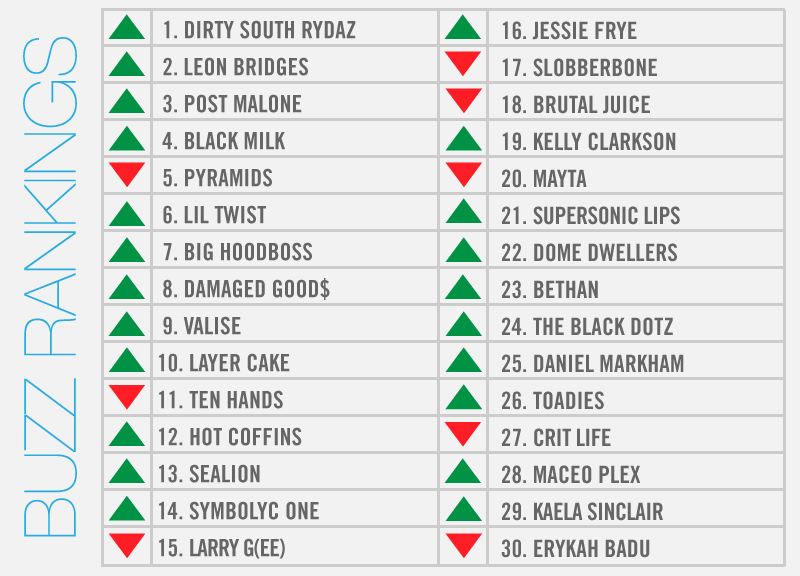 No, it's not 2005. And yet this week's list of buzzing local acts is full of throwbacks.

At the top of the heap is Dirty South Rydaz, the Tum Tum- and Big Tuck-led Dallas hip-hop collective responsible for such classic tracks as “Southside Da Realist” and “Caprice Music.” Just in time for SXSW, the outfit has booked itself a few shows and released a couple of new tracks from an upcoming album that's been in the works since November. It's certainly a big deal around these parts. As we wrote earlier this week: “The reputation that the DSR crew on the whole boasts to this day remains high: You'd be hard-pressed to find a hip-hop night worth its salt in this city that doesn't drop at least one DSR song with some regularity.”

This week, of course, marks the first No.1 finish for DSR in our weekly, local music power rankings.

Like that outfit, SXSW has been kind to a few other local acts. Leon Bridges, for instance, has been getting glowing reviews from rags all over the country — like Billboard, for instance — in response to his performance in the Spotify House earlier this week.

Black Milk and A.Dd+ are a couple of other of this week's vote-getters making an Austin appearance this weekend. The former will also headline a much-anticipated set at Three Links tonight that'll feature a full live backing band.

Farther down the list, Hot Coffins pulled down more 35 Denton-related buzz for itself than maybe anyone else. That much can be attributed to the fact that an 11-year-old drum prodigy named Robot sat in during the band's set. It also helped that he kicked some major ass in the process.

Other Denton luminaries such as Slobberbone, Ten Hands, Brutal Juice and Fort Worth's Telegraph Canyon each played pretty prominent, talked-about slots on the main stages at the three-day fest.