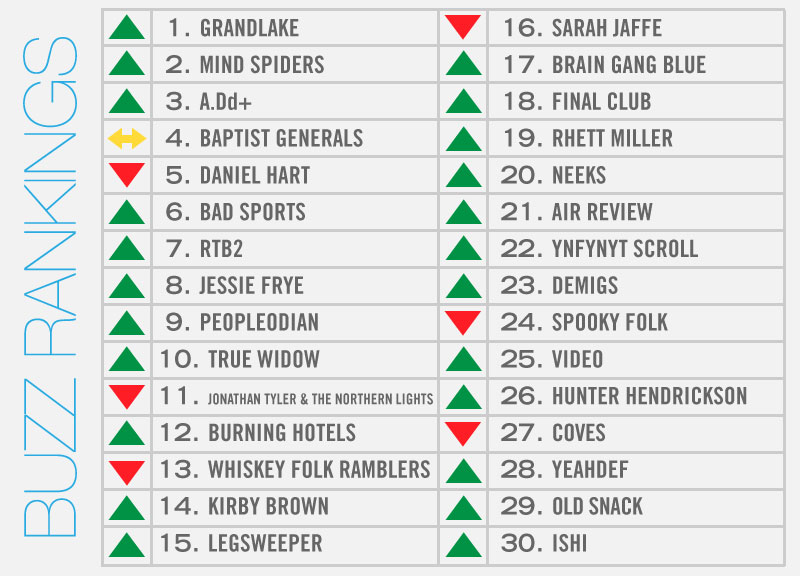 When You Save A Local Festival, You're Bound To Get Some Shine.

For a moment there, things were pretty somber up in Denton this week. The Jesus and Mary Chain had just postponed their scheduled Sunday night 35 Denton gig and no replacement band had yet been announced to fill their slot.

Along with their friend and sometime collaborator Jason Lytle, formerly of Grandaddy, who was in town to rehearse and prepare for a gig with Midlake down in Austin at SXSW, the Denton heroes stepped up to fill that void.

Not surprisingly, every outlet in town reported on it. Also unsurprising was the fact that Midlake, ever the well-rehearsed outfit, sounded impeccably tight backing up Lytle on Sunday afternoon in their fill-in capacity.

For the most part, this week's Buzz Rankings very much reflect the goings-on up in Denton last weekend thanks to a glut of local coverage on the festival. The Baptist Generals, performing their first Denton gig in some time at the fest, again placed in the list's top five. Other festival standouts — Peopleodian, Burning Hotels, Legsweeper, Brain Gang Blue and his Brain Gang counterparts, Final Club, Neeks, Air Review, Ynfynyt Scroll and Video among them — also placed on the list thanks to their successful 35 Denton forays.

The rest of the list is consisted largely of bands making waves thanks to shows scheduled for this coming weekend. Mind Spiders, A.Dd+ and Jessie Frye were among the North Texas acts The New York Times shouted out in their South by Southwest preview package, and Jonathan Tyler & The Northern Lights, Whiskey Folk Ramblers and Hunter Hendrickson placed well because of their scheduled performances at this weekend's upcoming post-St. Patrick's Day parade concert thrown annually by the Observer.

Old 97's frontman Rhett Miller, meanwhile, places because of the announcement of his newest solo record, and Sarah Jaffe, still riding high off of her own similar announcement, places for the same reason.