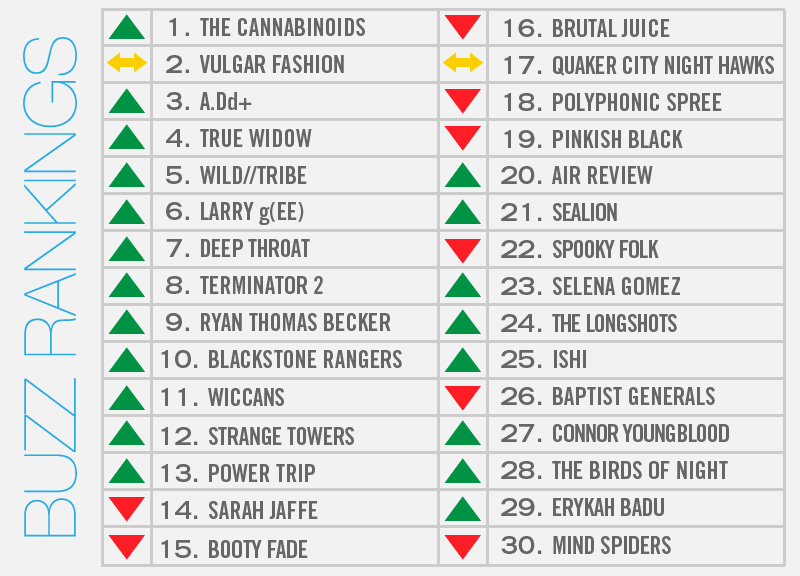 There Was No Avoiding The Cannabinoids This Week.

Back in September, Erykah Badu's backing band The Cannabinoids released a well-received remix of Sarah Jaffe's “Glorified High,” and their fittingly hazier re-imagining of that The Body Wins track gave a whole new interpretation to the type of “high” Jaffe originally sang about. It proved to be a great career move for the outfit, too, garnering them national praise from such national outlets as Prefix, and, more recently, set the group up for a very special live collaboration with Jaffe during last weekend's 35 Denton festival.

And special it was. When the performance was moved from one of the festival's outdoor main stages to indoor space at The Hive at the semi-last minute due to inclement weather, hundreds of attendees braved exceedingly long lines to get inside the venue — holding fast, even when the rains started to pour.

The wait was worth it: The Cannabinoids put on a great show that day, sounding great not only as Jaffe's backing band, but also as the band behind their set's surprise guests, A.Dd+.

A.Dd+ too made a strong impression this weekend, performing a well-received show of their own on the 35 Denton main stage before the rains came and forced their appearance with the Cannabinoids inside.

Vulgar Fashion, too, scored highly this weekend. In addition to their own highly anticipated 35 Denton set — one that saw them playing to not only a pretty significant crowd, but also to a bevy of photographers representing pretty much every publication in the region — the band also added a mention from Brooklyn Vegan to the growing list of national outlets hyping their latest EP.

And these were far from the only acts that had big moments at last weekend's fest.

Not only did True Widow play to a packed house at Rubber Gloves, but another 40-plus people gathered outside, attempting to listen to the bits of muffled drones that escaped through the venue's walls. Meanwhile, over at Dan's Silverleaf, Spooky Folk's Thursday night set proved to be another of the fest's hardest to get into indoor shows. Meanwhile, over at The Labb on Sunday night, the capacity crowd that came to watch Denton's Deep Throat caused such a furious amount of moshing that fest organizers felt justified in the fact that they'd brought in extra members of security just for their set — a move perhaps triggered by what went down in the sports-bar-turned-venue a couple nights before, when Wiccans cut their set short after excessively thrashing fans were kicked out during their own performance. (Thankfully, Wiccans would make up for their brevity earlier in the night with a raucous second performance later that night in a Denton taqueria.)

Other standout performances from 35 Denton included the Sunday night set from Strange Towers, which saw frontwoman Liz Larsen performing one song laying on the ground while her taken-aback audience gathered around writing body. Then there was Brutal Juice frontman Craig Welch, who proved during his band's main stage performance that he could, indeed, still pull of a mid-set headstand now that he's in his 40s. And, of course, there was Ryan Thomas Becker, who played so many sets during the fest that we kind of lost count.

Elsewhere, a few folks earned their spot in this week's rankings without the help of 35 Denton. Among them: Wild//Tribe, who announced that their May 25 show at Three Links would be their last; Larry g(EE), who has already opened for Bootsy Collins and Warren G at this year's SXSW; Booty Fade, who made their live debut at It'll Do this past weekend; The Birds of Night, who are playing this weekend's Spillover Fest as well as recently announcing their new album; and Selena Gomez who released a new single this week not only to promote her upcoming album, but also her soon-to-be-released movie, Spring Breakers