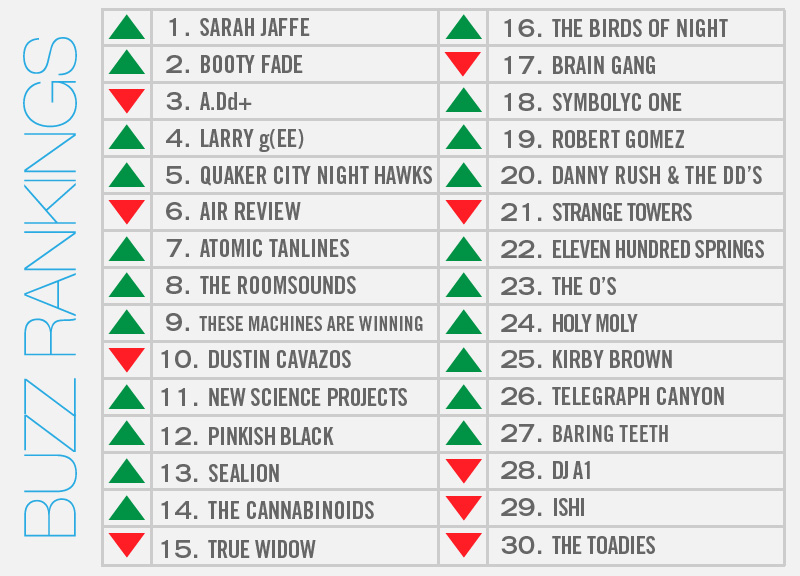 In the last couple of years, North Texas has fallen deeply in love with the idea of the music festival. And why not? For the most part, our weather is tailor-made for throwing big outdoor shows — at least for, say, nine months out of the year. And lord knows we've got more than enough local talent to fill out dozens of festival lineups without too much crossover.

Sarah Jaffe, who has proven herself as far and away one of the area's favorite artists by topping our weekly Buzz Rankings seven times previously, now celebrates her eighth week in the top spot thanks to announcements that she'll be appearing at both this year's 35 Denton and Untapped Fort Worth festivals. It's the former of those two announcements, though, that dropped a few jaws this week as word came down that the 35 Denton performance would see Jaffe making improvisational magic with Erykah Badu's baking band The Cannabinoids, whose members will be making use of “eight laptops, three turntables, six keyboards, four drum machines and a theremin” during their festival set.

Also worth mentioning: This week marks the end of our first year of keeping track of local music buzz rankings. And both Sarah Jaffe and A.Dd+, who combined to top our charts one out of every four weeks over the course of that run, both show up in our top three this week.

Other bands catching some shine this week for their inclusion in this spring's upcoming festivals include Quaker City Night Hawks, The O's, RTB2, Parallel Play, Kirby Brown, Holy Moly, Senor Fin and Dead Flowers, who will all be appearing at the Deep Ellum Big Folkin' Festival. Baring Teeth, The Birds of Night, Lonesome Ghost and Pinkish Black were added to Spillover. And then there's True Widow, who, like Jaffe and The Cannabinoids, will appear at 35 Denton.

Were it not for Jaffe's local festival announcement domination this week, the debut of Picnictyme and DJ Sober's new Booty Fade project would have easily landed in this week's top spot. Hey, that's just kind of what happens when one of the area's best DJs and one of the region's top hip-hop producers combine their talents. It also helps that their first leaked track, “F#$k Like a Stripper,” is pretty much the jam.

Finally, The Roomsounds, Larry g(EE), and the aforementioned A.Dd+ were afforded an extra bit of shine this week thanks to their participation in our upcoming one-year anniversary shindig we're holding on Saturday night at Sundown. Can you believe that we're turning one already? Let's share a (free) shot of Jameson about it, yeah? Sound good? Yes? Yes.