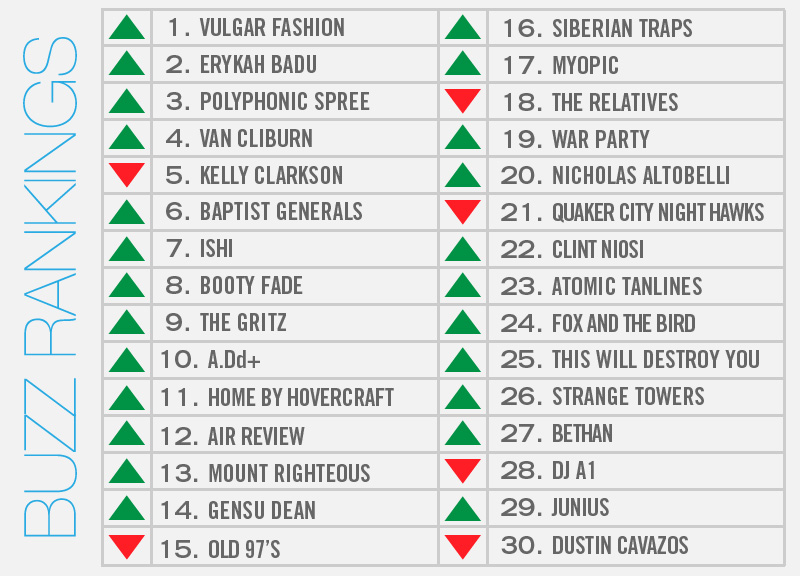 Most weeks, when we're compiling these here Buzz Rankings, there's a clear-cut choice for the top spot, an artist that finishes the process with way more points than the next-closest name. During down weeks, the opposite happens, and several acts wind up closely bunched together at the top — almost by default.

This, of course, wasn't a down week. Yet, somehow, there still wasn't much of a clear-cut No. 1.

Credit the copious national publicity North Texas acts earned this week for that. This week, there were easily a half-dozen act who, in all fairness, deserved the top spot this week.

And, when all was said and done and all points were tallied, it was Denton duo Vulgar Fashion who found themselves atop of the heap. Despite everyone else's accomplishments this week, it's hard to argue otherwise. Hey, Pitchfork mentions don't just grow on trees. Neither do ones from MTV Hive, AOL Spinner or AV Club, though, and that's why such acts as Ishi, Gensu Dean, Air Review and Baptist Generals also rank highly this week.

Still, none of that matched the level of national publicity received by the late piano prodigy Van Cliburn this week. The Fort Worth musician and national hero was essentially mentioned in every single newspaper in the country after losing his battle with bone cancer earlier this week. And, indeed, winning a piano competition designed to showcase Russia's cultural superiority to the U.S. during the height of the Cold War very much helped seal one of the country's most endearing musical figures of the past century's reputation.

While the world was mourning the death of one local legend, another widely heralded local was celebrating her birth. Erykah Badu's birthday performance at Granada Theater, of course, also served as something of a 16th anniversary celebration for her seminal debut release Baduizm.

Then there's another batch of artists — the ones who earned their spots this week by releasing new material. The Polyphonic Spree, for instance, debuted their first new non-Christmas track in several years this week. Booty Fade, meanwhile, furthered their case for being the most hyped new act in town with the release of their second single, “Stryrofoam Cup”. On the other hand, The Gritz put out another track from their long-anticipated release that features Snoop Dogg and Raheem DeVaughn, which rightly turned a few head. And then there's Home by Hovercraft and Siberian Traps, each of whom have album release shows this weekend.

Yup. It was a good week, no doubt.