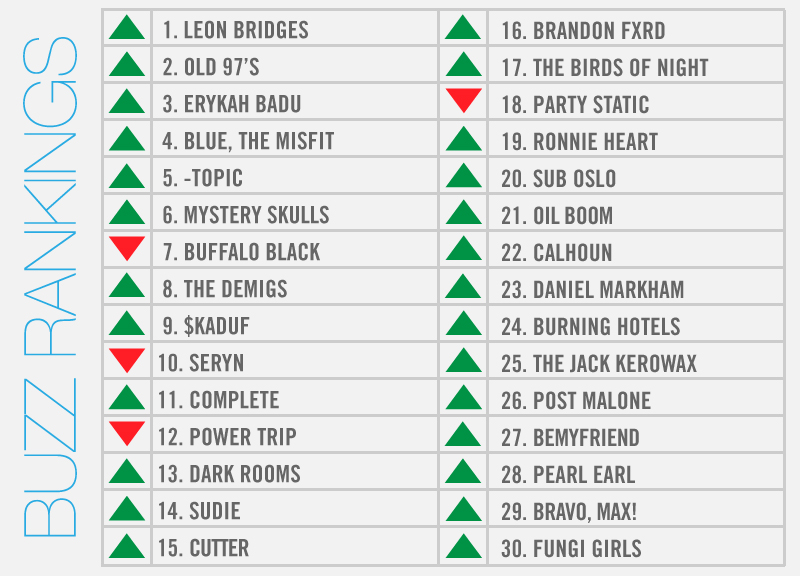 Leon Bridges Had A Bear Of A Week.

Since mid-2014, it seems like all anybody talks about around here any more is how amazing Fort Worth throwback soulman Leon Bridges is, and/or how they were totally on to him way before anyone else.

Make no mistake: Leon's pretty damn incredible, and about as genuine a dude as they come. It's just pretty remarkable to think that for pretty much the entirety of his astronomical rise from obscure Funky Town upstart to world-renowned, major label signee, there's only been — count 'em — two of his songs on the internet.

So you can imagine that when he finally released a third single earlier this week, the Internet responded with a sure and steady stream of Leon Bridges buzz. In turn, Leon finds himself at the top of our weekly, local music power rankings for the third time in the last four-and-a-half months. Not bad at all.

Just behind Bridges in this week's Rankings is the Old 97's, which received a lot of chatter from the guys on 1310-AM The Ticket this past week or so, thanks mostly to the fact that the alt-country pioneers played a free show for the station's listeners last Saturday, which drew some 3,000 P1s to the Irving Convention Center.

The band narrowly edged out Erykah Badu for the No. 2 spot. The queen of neo-soul — whose birthday just so happens to be today, we might add — vent viral, once again, after showing up on yet another local news broadcast.

Then there was Blue, the Misfit, who performed at Texas Theatre's big behind-the-screen hip-hop showcase last weekend, and who will also do his thing as part of our own three-year anniversary party later tonight. Also performing at that one will be Dark Rooms, Sudie and Brandon Fxrd.

Also playing big local shows this week: Seryn, which performed at Thin Line Fest last weekend and will hit up Good Records' stage this weekend; Oil Boom and Calhoun, which will open up Quiet Company's album release show at Dada; and Power Trip, which played a homecoming show last weekend at Rubber Gloves.

Elsewhere: -topic, Ronnie Heart, Daniel Markham, The Birds of Night, Bravo, Max!, Cutter, Mink Coats, Sub Oslo and The Burning Hotels earned their own spots on the list thanks, in part, to their own recent shows. Not to mention, The Demigs will play a release show for its new double vinyl LP this weekend at Dan's Silverleaf.

Finally, Mystery Skulls and Pearl Earl each released new videos, and $kaduf and Complete were each profiled by other local publications.