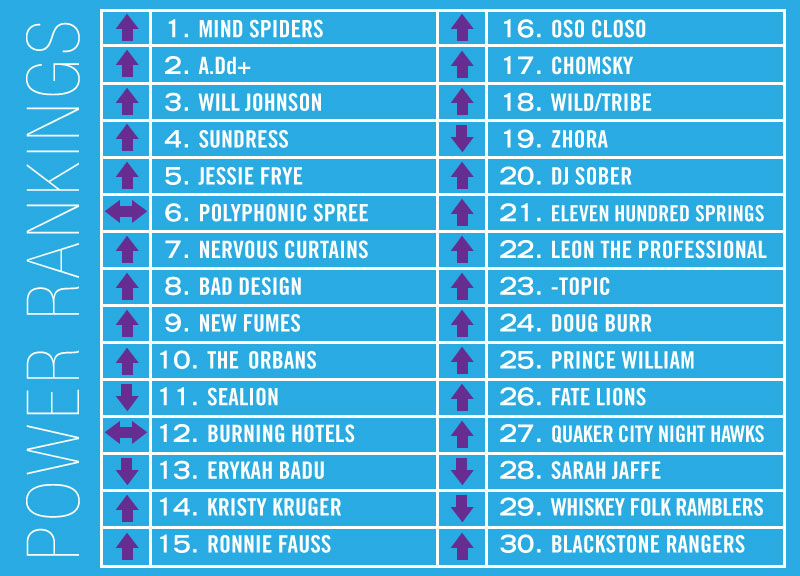 Each week, we take a survey of the local music scene each and try to determine which bands in town are really putting in work and seeing it pay off. Which bands have the most intriguing shows coming up? Which bands are getting the most press around town (at the Observer, at Pegasus News, at D Magazine's FrontRow blog and at various other outlets)? Which bands have accomplished the most notable feats of late? Based off these criteria, three of our music writers submit a list to be weighted and compiled into a master list to be revealed in this here space.

We're just in our second week of this here experiment and, as somewhat expected, there are already some huge changes in our Buzz Rankings ordering. With Smile Smile's Valentine's Day ad for Reese's Peanut Butter Cups no longer airing on TVs across the country, that band fell from our No. 2 slot all the way off the list. Whiskey Folk Ramblers, meanwhile, dropped substantially as well — from No. 1 to No. 29.

Mind Spiders, on the other hand, jumped from No. 23 to No. 1 based off a wave of good press both local and national. And A.Dd+ stayed strong, moving up one slot from No. 3 to No. 2.

Among this week's other rising acts: Centro-matic frontman Will Johnson, who announced participation in two new supergroups (Overseas and New Multitudes); Sundress, who announced a new booking deal with the powerful Windish Agency; Wild//Tribe, who was signed to Southern Lord; Ronnie Fauss, who got signed to New West; Oso Closo and Chomsky, who each announced reunion shows; and The Orbans, who announced a new record.