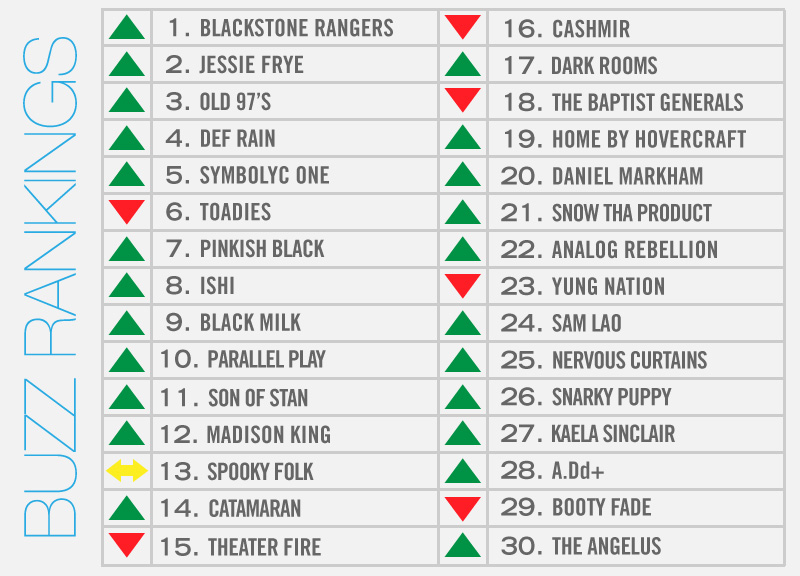 Dallas synthgaze trio Blackstone Rangers have been steadily gaining steam the past few weeks ahead of the release of their much anticipated sophomore effort, which will come on the 25th of this month. To that end, though, local fans, at least, won't have to wait that long to get their hands on the disc. Ahead of the west coast portion of the national tour in support of its Saint Marie Records debut the band will play an early album release show this weekend at Crown and Harp where they'll have early copies of the disc and other new merch on sale for the first time.

Further cementing the group's position atop our weekly local music power rankings for just the second time was the debut of Blackstone's VHS-shot video for the song “Frozen Echo” which debuted this week via UK blog Gold Flake Paint.

Not far behind the band was Jessie Frye, who performed a pair of release shows of her own for her new disc, Obsidian, last weekend. Meanwhile, Old 97's, who find themselves in the No. 3 hole this week, announced this morning they'd be debuting their 10th LP during an April performance at AT&T Performing Arts Center's Strauss Square. And Madison King, who'll join the alt-rock luminaries on that bill, not only held a listening party for her new album last week at Twilite Lounge, but she'll return to that bar tonight to perform anti-Valentine's Day breakup songs.

Then there's Catamaran, who released its debut EP at Dada over the weekend, and Def Rain premiered a new track from its upcoming release via Ear Milk's site. And still, other acts like Somebody's Darling, Nervous Curtains, and Picnictyme have all indicated via social media in the past week they're all currently recording new efforts.

Elsewhere; New releases aside, acts like Theater Fire, Valve, The Slack, and Macavity all received votes this week based on recent and/or upcoming reunion shows; Dr. Dre called SymbolycOne a superstar; and Ishi and Pinkish Black each earned a place on this year's Free Press Summer Fest.