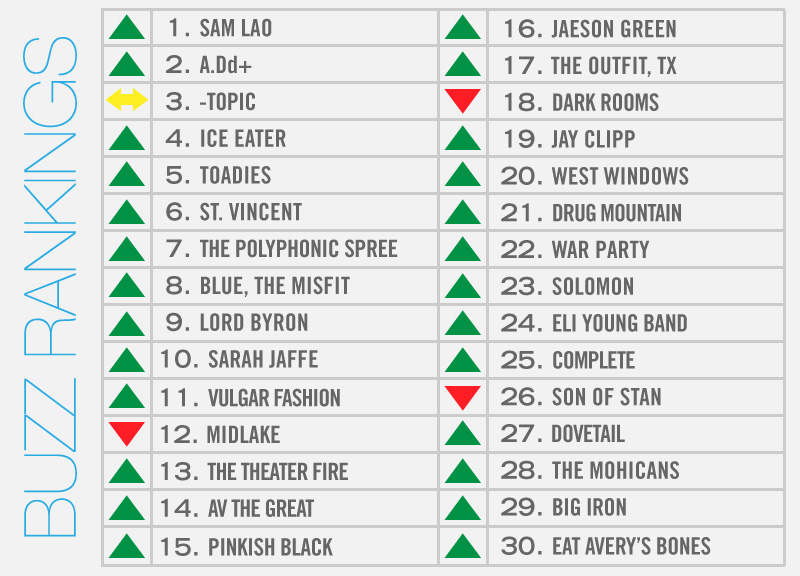 This Week, Sam Lao Got Louder Than Ever.

Even before Complex named Dallas one of the most underrated hip-hop cities in America, plenty of folks in town had already begun referring to the current period of local hip-hop resurgence as this region's “golden age.”

Even so, we'll admit that it's still fairly impressive to think that just a handful of performers from that scene — acts who, for the most part, haven't toured much or received all that much attention outside of the region — will inevitably pack out the Granada tomorrow night as part of the Dallas Observer's North Texas Hip-Hop Showcase. And, for her part, we'd argue first-time Buzz Rankings champ Sam Lao is one of the biggest draws on the entire bill.

Helping the lanky emcee push past acts such as A.Dd+, Blue the Misfit, -topic, Lord Byron, Jay Clipp, Jaeson Green and AV the Great — each of which is also appearing on tomorrow night's bill — was a feature on DFW.com that declared her as the act to keep an eye on in 2014. Well, that and the fact that she'll return to the Granada later this month to open for Sarah Jaffe and Zhora.

All told, it has been quite the week for the North Texas hip-hop scene: The Outfit TX Buffalo Black and The Mohicans each released music videos of late; -topic released his much-anticipated sophomore album; The Outfit, TX, The Mohicans, and Booty Fade helped Dada celebrate its third anniversary; and a half-dozen others were announced earlier this week as official performers at this spring's South By South West festival.

And yet somehow a few non hip-hop acts managed to create a little buzz for themselves this week, too. St. Vincent released the second promotional single for her soon-to-be-released self-titled full-length, the Toadies announced a 20th anniversary reissue of 1994's breakthrough album Rubberneck, onetime local metal outfit Big Iron reunited and The Theater Fire announced a rare performance of their own in the coming weeks.