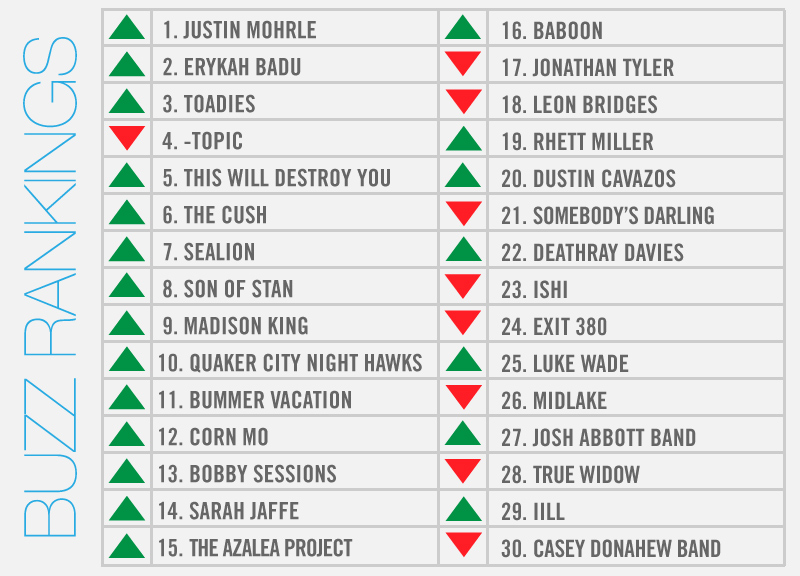 Justin Mohrle Got His Checkup This Week.

Not going to lie, you guys. It's been a pretty huge week for Justin Mohrle.

Of course, for the Garland-sprung rapper once known as Love, JT, getting write-ups in conceivably every hip-hop-minded website in the country this week probably pales in comparison to the fact that he's spent damn near every day these past several months working alongside legendary producer Dr. Dre on the album formerly known as Detox.

What had been a decently well-kept secret for some months now was revealed in a D Magazine feature this week that was re-posted ad nauseam around the web — to the point that there's probably few people left who haven't heard that the good doctor's newest protege is a 23-year-old white kid from the Dallas suburbs. Naturally, all that increased notoriety helped Mohrle score his first-ever No. 1 spot in our weekly, local music power rankings, too.

Just a tick behind the rising superstar is seven-time Buzz champ Erykah Badu, who was announced this week as the opening-night performer at forthcoming Deep Ellum venue The Bomb Factory. Two days later, Toadies will further christen the joint. And, in a week with only a few really big shows, future show announces were a big player on the Rankings.

Another big show announced this week was the inaugural Downtown Music District Festival, which will feature performances from Jonathan Tyler, Ishi and Exit 380. Also? The Josh Abbott Band was announced as the headliner for the Greenville Avenue St. Patrick's Day Parade after-party this year.

Of course, there were a handful of big shows that actually went down in the near-present this week — like This Will Destroy You's past Friday night headlining set at Granada Theater, where the band was joined by True Widow. Or this weekend's coming Ragonk-a-Thon at Trees, which will include performances from Sealion, Son of Stan, Bummer Vacation, -topic, Bobby Sessions and The Azalea Project among others.

Elsewhere: The Cush released a new album; Dustin Cavazos heads off on his first tour; and Madison King turned in a Live @ Malone Pictures session.