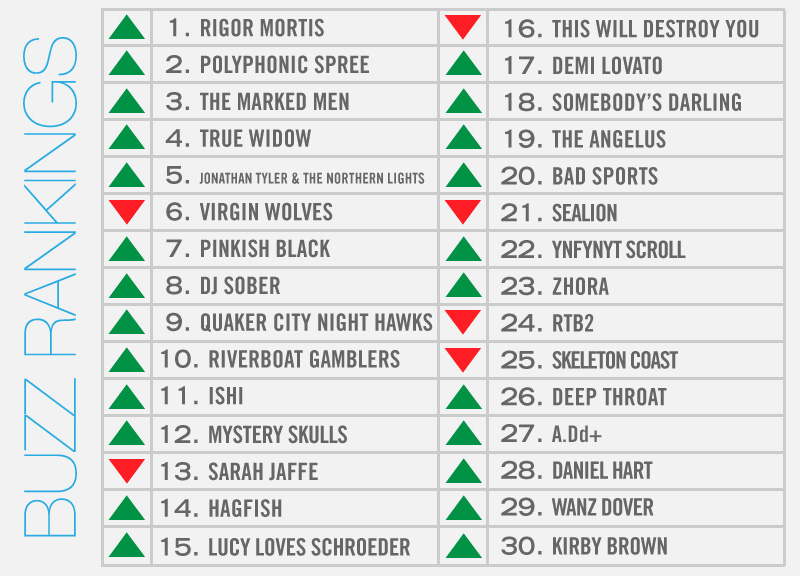 A Rough Week For Rigor Mortis.

Each week, we take a survey of the local music scene and try to determine which acts in town are really putting in work and seeing it pay off. Which bands have the most intriguing shows coming up? Which bands are getting the most press around town? Which bands have accomplished the most notable feats of late? Which bands are in the news? Based off these criteria, three of our music writers submit a list to be weighted and compiled into a master list revealed each week in this here space. We like to think it's fairly revealing.

Though we see them time and time again on stages around town, mesmerized by their charisma, talent and hip duds, we tend to forget that musicians are just people too. Like us regular folk, they too come home for the holidays, hang out with old friends during their Christmas vacations and, sadly, they remind us at times of their mortality.

Tragically, the biggest story on the local music front over the past week was also one of the most heartbreaking. On Saturday, Rigor Mortis/Ministry guitarist Mike Scaccia collapsed onstage at Fort Worth's The Rail Club as part of a 50th birthday celebration for Rigor Mortis frontman Bruce Corbitt. Shortly after, he was taken to a hospital and pronounced dead due to a sudden heart attack. Eulogies for Scaccia appeared everywhere from Rolling Stone to every metal publication known to man.

Ministry frontman Al Jourgensen too posted an especially touching farewell to his friend on his Facebook page: “I just lost my lil' brother and my best friend — the 13th Planet compound is devastated, completely in shock and shattered. Mikey was not only the best guitar player in the history of music, but he was a close, close, close part of our family — and I just lost a huge chunk of my heart today. Our lives are forever changed. Life without Mikey is like orange juice without pulp — kind of bland. I have no words to express what this guy meant to me, my family, my career … Everything!”

On a more uplifting note, The Polyphonic Spree proved this week that there is no place like home for the holidays. For the past decade, the Spree's holiday extravaganza shows have become a cherished local tradition. This year, though, they decided to spread their cheer beyond Dallas' city limits, taking their show on the road. This Saturday at the Lakewood Theater, though, the plus-sized outfit put on their most extravagant offering yet.

But the Spree aren't the only ones who know that you can't beat home sweet home for the holidays. Take, for instance, Luis Dubuc, whose Mystery Skulls project has been calling Los Angeles home as of late. The dance-based outfit will be performing at an open-bar New Year's Eve event in the design district. DJs Sober and Redeye, who also received votes this week, will be amongst those performing at that affair as well.

Like Dubuc, folk rocker Kirby Brown headed for the coast a few months back as well. But that wouldn't be the last time Brown's Dallas fans would hear from the now-New York resident. On Christmas day, Brown's latest single, “On the East Side,” earned its iTunes release.

And that doesn't end the string of homecomings. The now Austin-based Bad Sports will be performing tonight at Rubber Gloves. That bill will be headlined by The Marked Men, whose performances have become somewhat infrequent in recent years since co-frontman Jeff Burke moved to Japan. (He's now moved back.)

Maybe the anticipation for that Rubber Gloves show has something to do with that old “absence makes the heart grow fonder” cliche — or maybe just that old saying about not realizing how cool something is until it's gone.

Either way, the Hagfish are quite familiar with that concept. The pop-punkers rarely ever perform at all these days, but when they do it's usually on Christmas at Trees. And they generally kick ass.

That phenomenon should apply sevenfold to fellow onetime pop-punkers Lucy Loves Schroeder, who haven't performed together since Sara Radle relocated to Los Angeles to join The Rentals in 2005. The first reunion gig for the trio comes this Saturday at Double Wide.

And, finally, Fort Worth duo Pinkish Black once again find themselves on the receiving end of Pitchfork's infatuation. This time, the influential site named their self-titled debut the sixth best metal album of 2012, citing Daron Beck as one of the year's “most compelling vocalists” in the process. That designation lead D Magazine's Frontrow blog to call the band “the most successful guitar-free 'metal' band ever to erupt from the fertile metallic soil of North Texas.”