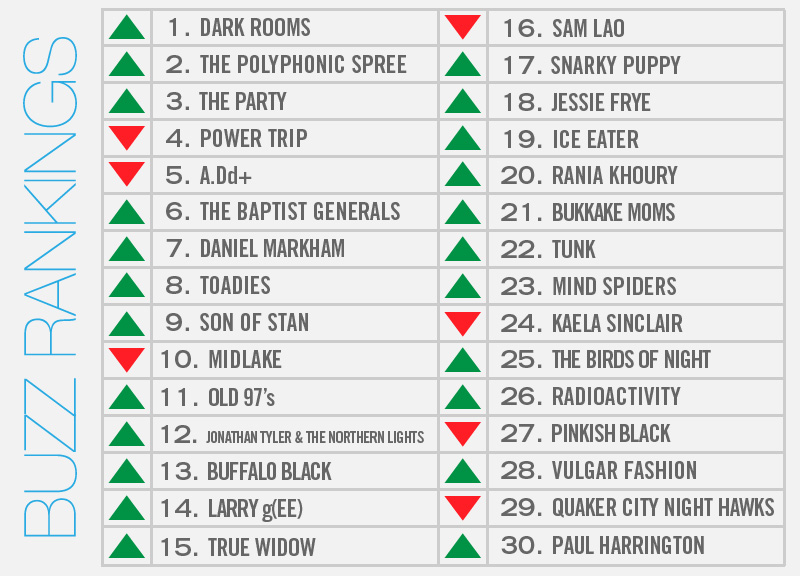 Partially because of the proximity to the impending start of the new year and partly due to the somewhat slowed news cycle typical of this time of year, the ritualistic looking-back-at-the-year-that-was has been a big player in the local media world this week.

To that end — and very much like last week's edition of our local music power rankings — this week's Buzz Rankings were dominated by artists appearing on local year-end lists. Aside from our own list, the Observer posted the second of its planned three-part list, and though it wasn't a list, per se, D Magazine's FrontRow blog published a year-in-review post of its own this week that praised several locals, too.

In our own list, though, Dark Rooms once again reminded us that they're not just the best new local act of 2013, but potentially the best local act, period. It would be foolish to simply take our word for it, though. And, really, there's no need as there are plenty of potential opportunities to catch sets from the Daniel Hart-led band in the coming weeks. This Tuesday, the band will play main support at The Where House's big New Year's Eve masquerade ball out in Fort Worth. A few days later, the band will perform at Dada as part of that venue's three planned $3 third anniversary shows.

Other big New Year's Eve shows have been receiving tons of promotion recently, too. Ads for Larry g(EE)'s South Side Music Hall bash, the Old 97's' annual House of Blues shindig and Jonathan Tyler & The Northern Lights' yearly Granada Theater throwdown have each been pretty unavoidable of late.

Then there was The Polyphonic Spree, which continued to exert holiday dominance on Lakewood dwellers this past weekend with its 11th annual holiday extravaganza. And, lest we forget, there was The Party, who made the prospects of the new year instantly more anticipation-worthy with the announcement of their plan to reunite for a January 24 party we're helping to throw at the It'll Do Club.

Elsewhere, Toadies are getting set to rock Billy Bob's, Snarky Puppy received a Grammy nod, and Paul Harrington helped Pitbull and Ke$ha top the charts with some top-notch harmonica licks.

Cover photos of Dark Rooms via the band's Facebook page.