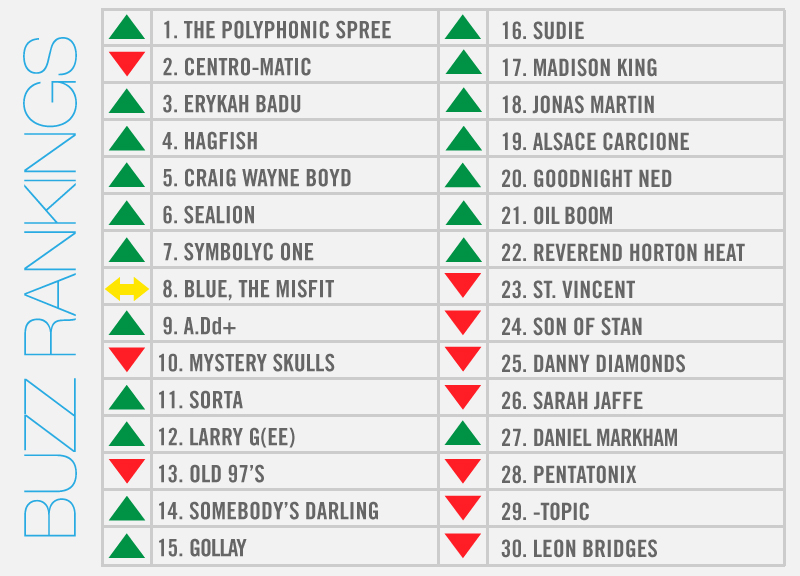 This Week, The Polyphonic Spree Decked The Halls.

Being Christmas Eve, it's only fitting that the band with the more holiday spirit than anyone else in town should find itself atop our weekly local music power rankings.

That's right: On the strength of its 12th annual-ish Holiday Extravaganza, which went down last weekend, The Polyphonic Spree finds itself in just that position. And it's something the plus-sized outfit knows a thing or two about, too, having now topped our Buzz Rankings on eight occasions. Interestingly enough, none of the group's previous wins has come in the month of December.

So this one was a longtime coming, we suppose.

A close second this week was Centro-matic, which played its final four shows this past weekend in Denton, and just narrowly missed adding one last Buzz victory to its total. As such, the long-running Denton heroes finish with three Buzz No. 1's.

Not far behind was Erykah Badu, who joined DJ Sober and Picnictyme for an especially packed edition of their Beauty Bar weekly. Even without Dave Chappelle in attendance or the help of “tacky promoters,” Sobes, Pic and Badu blew the roof off of that place. No surprise there: Individually, each of these three are well-known for their abilities in helming lauded affairs; when their powers combine, those are only going to increase.

Other big shows this week included Red Bull's big #Yearender blowout at Trees, which helped Mystery Skulls earn his spot in the Rankings. And speaking of blowouts, our own holiday party, which featured performances from Sealion, A.Dd+ and Larry g(EE) was quite the time, too.

Also not to be forgotten was Sorta's reunion last weekend at Twilite — a feat Hagfish will try to match with its annual Christmas reunion show tomorrow night at Three Links.

Meanwhile, most everybody else on this week's list were given nods in year-end songs, albums and/or music videos lists in the Star-Telegram, Dallas Observer and Fort Worth Weekly, as well as our own. To that end, you can find our favorite music videos of 2014 post here, and our still-in-progress best songs list here.