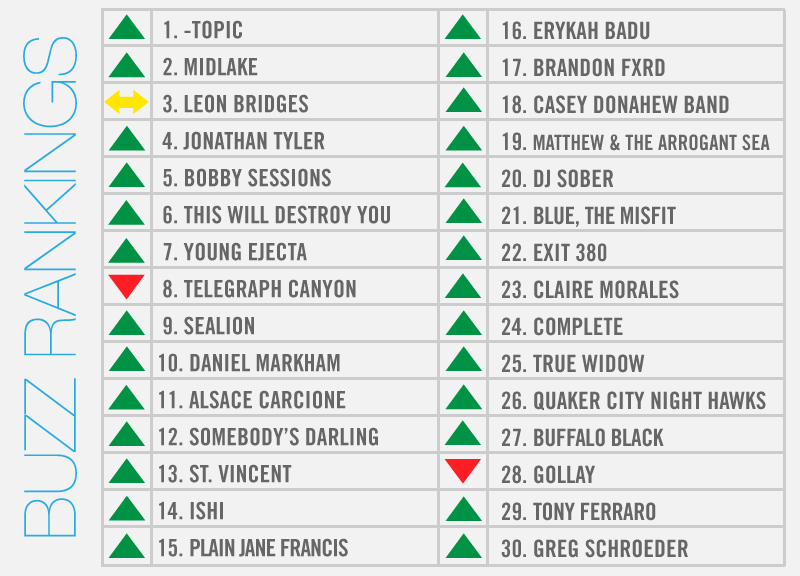 This Week, -topic Was The Subject.

Has anybody been hustling harder than -topic of late?

Let's count the ways: Not only did the Dallas producer/rapper pull down a placement in a McDonald's spot recently, but he's also been gearing up for his opening slot at tomorrow night's Red Bull Sound Select show, where he'll perform with a live backing band.

We're not the only ones that have noticed the man's efforts, either. He also earned himself a nice Dallas Observer feature this week, as well as an appearance on local radio station K104. Now add to that this, -topic's first-ever Buzz Rankings No. 1.

Not far behind was 6.5-time Buzz winner Midlake, thanks largely to the fact that the band's drummer announced plans this week to open a new restaurant in Denton.

Holding strong in the No. 3 hole is Leon Bridges, who keeps his spot after a strong showing at last weekend's Have a Heart show at Trees.

Speaking of big shows: This Will Destroy You headlines the Granada this weekend, Casey Donahew Band headlines House of Blues and Somebody's Darling will play a farewell show, of sorts, at the Kessler on Saturday before it members relocate to Nashville for a spell.

Further down the list, acts such as Daniel Markham and Tony Ferraro, Alsace Carcione, Claire Morales, Young Ejecta, Bobby Sessions, Plain Jane Francis and Brandon Fxrd earned their respective spots due to the release of new albums and/or singles — many of which you can listen to here.