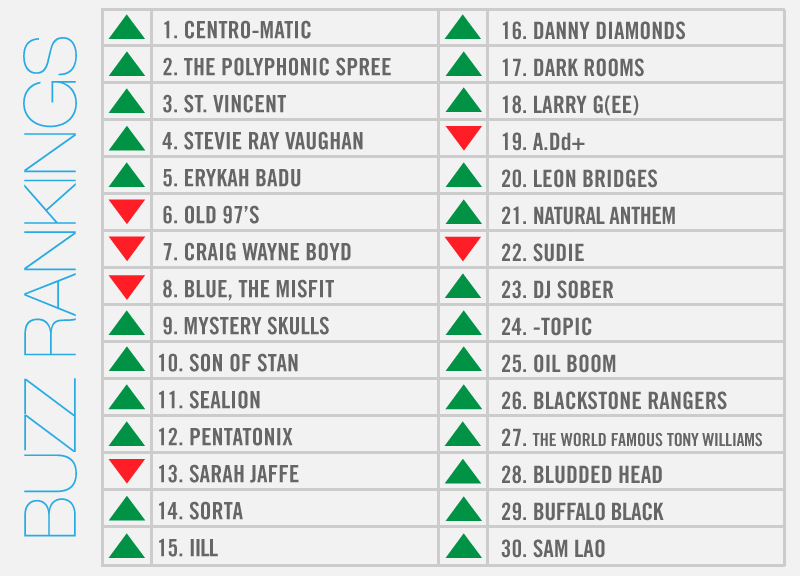 This Week, Centro-matic Goes Out On Top.

After winding down its December farewell tour, Denton favorite Centro-matic will play its last-ever sets over the course of three sold-out shows at Dan's Silverleaf this weekend — or, well, four if you count the band's “secret” acoustic set slated to go down at Rubber Gloves on Saturday afternoon.

Judging from the band's recent Dallas farewell show, this should be a stunning — and perhaps a tad emotional — crop of shows. And, just before the band puts the cap on a somewhat underappreciated 18-year career, it earns the top spot on our weekly, local music power rankings for the third, and presumably last, time.

Hey, at least the band can say it went out on top.

Not far behind this week was The Polyphonic Spree, which will throw its 12th annual(-ish) holiday extravaganza this Saturday at Lakewood Theatre. Adding a bit of extra gravitas to the show is the fact that there's a greater-than-zero chance it'll be the last one at this particular venue.

Other big holiday shows of note this weekend — in our estimation, anyway — include our own holiday throwdown this Saturday at Dada, which will feature performances from A.Dd+, Larry g(EE) and Sealion. Meanwhile, Erykah Badu, who started her week heading up a party for Dave Chappelle, will spin records again at tonight's holiday edition of Big Bang at Beauty Bar.

Other big shows from the current rankings period: The Old 97's' Hitchhike to Rhome 20th anniversary celebration at The Majestic; last night's Red Bull-hosted #Yearender show at Dada with Son of Stan and Dark Rooms; and tonight's second Yearender show at Trees, which will feature Mystery Skulls.

Elsewhere: Stevie Ray Vaughan was inducted into the Rock and Roll Hall of Fame; St. Vincent released a new music video and did Marc Maron's WTF podcast; and Craig Wayne Boyd won the seventh season of NBC's The Voice.