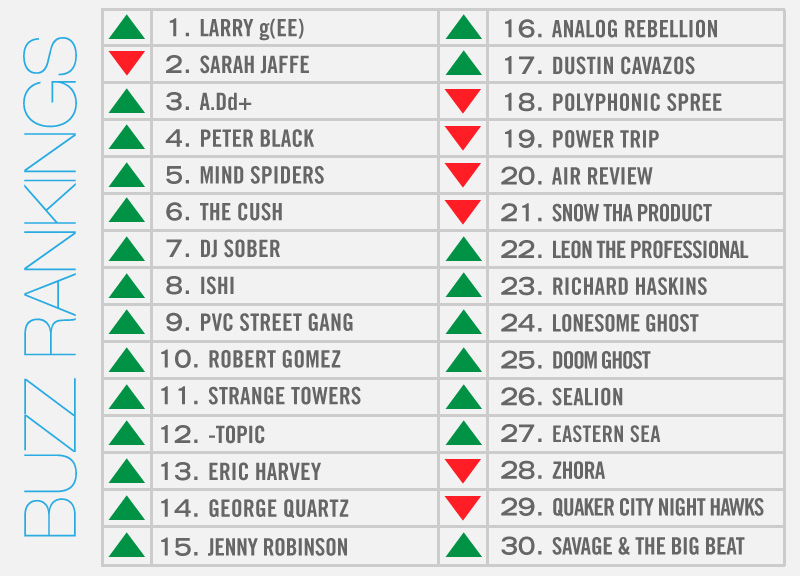 Thanks to a strong-to-quite-strong performance on Jimmy Kimmel Live! this past Monday night, Larry g(EE) and Co. find themselves atop our buzz rankings list for the first time ever this week. Deservedly so: Larry and his plus-sized band performed the songs “Yo Mamma,” and “Camera Phone” during their national television debut, and sounded great while doing so

Then, the very next night, the seven-time buzz rankings champion Sarah Jaffe continued North Texas' late-night television dominance with a Kimmel performance of her own. Jaffe's performance even warranted its very own watching party at Sundown at Granada.

And, hey, he should. Things are good right now.

Jaffe's guitarist, Robert Gomez, will be performing selections of his own recently-released concept album Severance Songs tomorrow night at Dan's Silverleaf. Rap duo (and four-time buzz rankings toppers) A.Dd+ announced their long anticipated DiveHiFlyLo mixtape would be released in January. Orbans frontman Peter Black released word that physical copies of volumes one and two of his Heads Many Hands project would be available by February of next year.

Yes, there are good days indeed.

Well, unless you're Wee-Beasties frontman Richard Haskins. His band doesn't have any new releases or big shows to speak, but his name showed up in the papers nonetheless. Earlier this week, Haskins gave a full confession to police officers after attempting to rob a Denton bank.

Though he didn't make off with any cash, he still sits in Denton County Jail on $25,000 for his efforts just the same.

Crime doesn't pay, kids. Unless you're looking for some buzz.