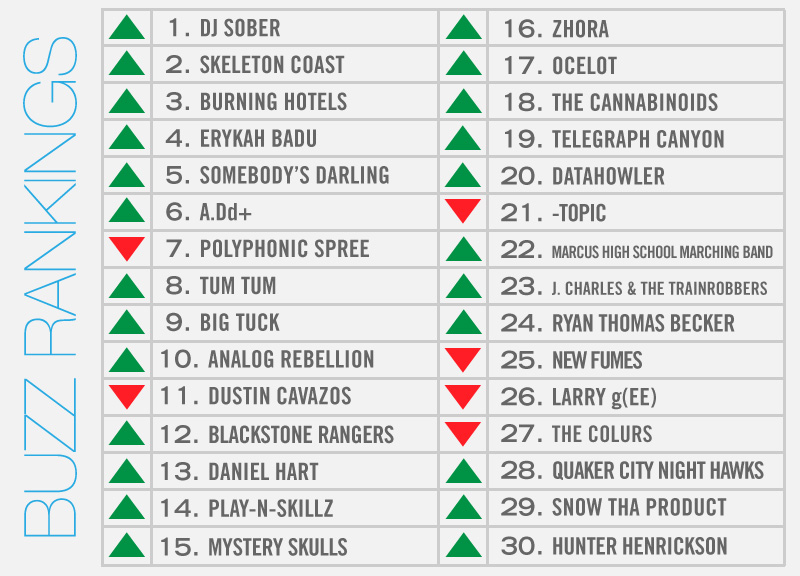 Sure, there are loads of popular DJs in town. A handful of especially talented ones, too. But, more and more of late, it seems like when a club, promoter or organization needs a DJ for a high-profile gig, it's Sober that gets the call. Even Dirk Nowitzki's guilty of that.

We here at Central Track aren't really above this line of thinking either. Heck, we just announced earlier this week that we've booked Sober to spin at our upcoming Hometown Glory event next month at Dada.

But we're far from the only ones who think so highly of the DJ. Even a cursory look at his recent and upcoming gigs indicate that he's very much a man in high demand. Take, for instance, his opening slot for French duo Justice last week at the Palladium. Or that fact that he'll be spinning with Eli Escobar at Beauty Bar's two-year anniversary party later this month. Or that he'll be closing out the outdoor stage at Trees' Dallas Observer Music Awards showcase lineup this Saturday. Or that he performed with fellow list-makers A.Dd+, as he is wont to do, at last weekend's Fun Fun Fun Fest in Austin.

That Fun Fun Fun Fest performance, in should be noted, earned the local rap duo, who perform tonight at Dada, a nod in Spin magazine's FFF coverage.

Oh, and, not at all surprisingly, Sober will be DJing along and behind A.Dd+ on that Dada bill tonight, too.

But the bigger story at Dada tonight is the reunion, of sorts, of the Dirty South Rydaz, as local rap legends Big Tuck and Tum Tum are slated to share a bill for the first time in years. Dubbed “The Day Dallas Stood Still,” Dustin Cavazos will also performing on this bill as well. Expect some other local rappers to make some cameos tonight at Dada, too.

No stranger to local cameos herself, Erykah Badu made headlines this week when the trailer for the upcoming black western They Die By Dawn was released. According to IMDB, Badu will be playing a character named Stagecoach Mary alongside such names as Rosario Dawson, Jesse Williams, Isaiah Washington, Giancarlo Esposito, Idris Elba and Micahel K. Williams. If her performance as a singing zombie during last week's Halloween night jam at the Prophet Bar is any indication, it should be a hell of a flick.

Not to be outdone, her backing DJ collective, The Cannabinoids, will find themselves performing at this year's Dallas Observer Music Awards ceremony next week at the House of Blues.

Speaking of the DOMAs, it occurred to us recently that most of the acts in our buzz rankings this week are up for awards this year, and will be among the 60 bands performing on six stages throughout Deep Ellum on Saturday night.

A couple of bands, however, will be pulling double duty that night: Blackstone Rangers and Daniel Hart have been tapped to perform at this year's Art Conspiracy event Saturday night as well. The former, along with alt-country outfit Somebody's Darling and a handful of others, found themselves this week among the first batch of confirms for next spring's SXSW conference in Austin.