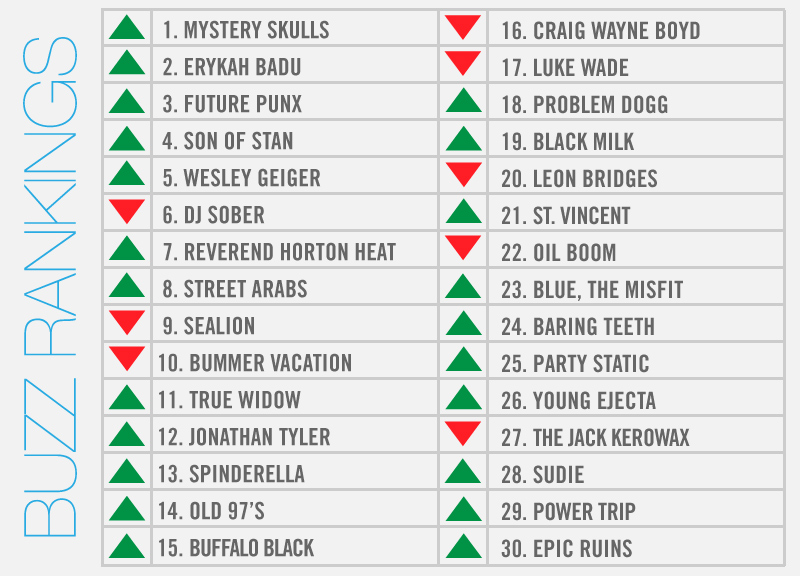 Last month, Dallas ex-pat Mystery Skulls released his major label debut for Warner Bros. — one that features guest spots from acclaimed guitarist (and recent Daft Punk collaborator) Nile Rogers, as well as the singer Brandy. For his efforts, he's been lauded by every music-minded publication in town, including our own.

It's also helped Mystery Skulls land atop our weekly, local music power rankings for the first time ever in the going on 148 weeks we've been keeping track of these things now. Also helping Mystery Skulls edge out the competition this week is his inclusion as part of the recently announced Red Bull #Yearender concerts, happening on December 17 and 18.

Speaking of which, Son of Stan and Dark Rooms are also on those bills, though that's not the only thing that earned them their respective spots in the Rankings, either. Dark Rooms also performs at this weekend's Crown and Harp anniversary party, and Son of Stan, which we also profiled this week, is playing a couple times this weekend, most notably on a bill at The Where House that'll see another band featuring some of its members, Epic Ruins, reuniting for a one-off show.

Also? Bummer Vacation and Sealion kicked off the first of In The Garage Alliance's benefit shows and three-fourths of the Old 97's and The O's similarly performed a CF benefit at the Granada last weekend.

Then there's Street Arabs, which will release its second batch of tunes of the year as part of a Black Friday Record Store Day shindig tonight at Good Records.

Elsewhere: Spinderella pops up alongside her old pals Salt-n-Pepa in a new Geico ad; Craig Wayne Boyd and Luke Wade moved on to the Top 8 in The Voice; The Jack Kerowax, Problem Dogg and Oil Boom played album release shows; and Jonathan Tyler led a handful of locals already tapped to play next year's SXSW.