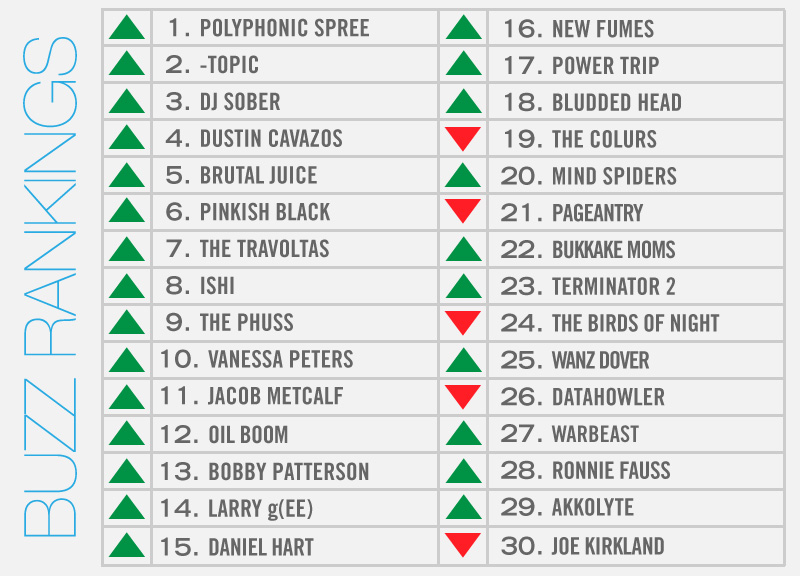 Once Again, The Polyphonic Spree Find Themselves Parked In The Top Spot This Week.

After years of planning and construction, Dallas' Klyde Warren Park finally earned its grand opening this past Saturday. And it did so in style with a hotly anticipated bill consisting of Trombone Shorty and local plus-sized indie-pop orchestra Polyphonic Spree.

As it were, anything even remotely deck park-related was a much-discussed topic over the course of the past few weeks — and the spectacle that the Spree put on last weekend certainly put park-related buzz over the top. What's more, the group, who just released their Christmas-themed Holidaydream album last week, followed that up with a soundboard recording of the band's performance of The Rocky Horror Picture Show live in London last night that was immediaetly made available for purchase following the show.

Following the longtime Dallas stalwarts in this week's local rankings is a surprising up-and-comer: Local rapper -topic, who was featured in the first installment of our new Local Celebrity video series this week, also had the privilege of opening up for the sold-out Kendrick Lamar show at South Side Music Hall last night along with fellow list-maker Dustin Cavazos. Judging from the emcee's rising stock and quickly improving skills, we'd venture to guess he'll earn himself the top spot sooner than later.

And just as has been the case for the past two weeks now, the Dallas Observer's music blog has spent much of their coverage this week highlighting and profiling bands nominated in their upcoming music awards, many of which are performing in next weekend's DOMA showcases. Among the groups profiled this week were Pinkish Black, Maleveller, Descender, War Beast, Akkolyte, Terminator 2, Bludded Head, The Relatives, Daniel Hart and Vanessa Peters.

This is also the time of year when the hard-working team running the 35 Denton festival begin their long buildup to this year's event with the first of their soon-to-be-many teaser videos highlighting the first batch of this year's performers. Finding themselves in among the first crop of announced acts are Denton figureheads Brutal Juice. No matter your opinions on the festival itself, the one thing that is certain is that the 35D crew are excellent promoters and rarely have trouble grabbing the attention of every media outlet and music fan in town with each of their efforts.

Not to be forgotten this week is local hardcore outfit Power Trip, whose members recently renovated an old Hispanic dance club on Cesar Chavez Boulevard into a DIY space called Tapatio Studios. This weekend, the venue — stated to feature primarily hardcore bands and wrestling events — will feature a Parade of Flesh-booked bill headlined by Titus Andronicus.