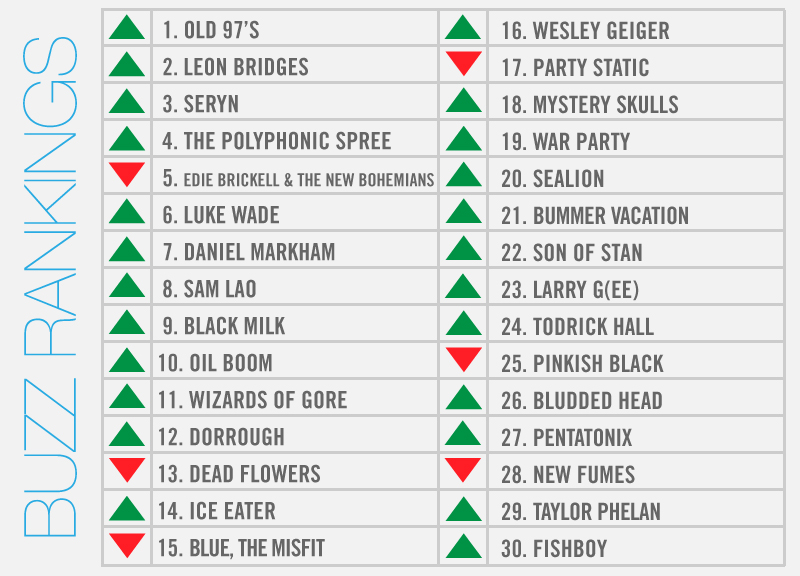 The greatest trick the Old 97's ever pulled was convincing the world to spend a week talking about its fourth-best album 20 years after its release.

Because, after the band announced that its debut, 1994's Hitchhike to Rhome, will be getting the reissue treatment this winter, that's precisely what's happened. And, when paired with the fact that the Old 97's will also play that album front to back as part of an anniversary concert at the Majestic Theatre this December, we suppose it is a pretty enticing bit of info.

It's enough, anyway, to have earned the band its fifth trip to the top of our weekly, local music power rankings.

Just behind the Dallas alt-country pioneers this week were acts like Leon Bridges and The Polyphonic Spree, each of which were helped out by their upcoming appearances at this weekend's Untapped festival. And right there with them were Edie Brickell & the New Bohemians and Seryn, which each performed at last weekend's North Oak Cliff Music Festival.

Television was another big player this week. To wit: Luke Wade and Taylor Phelan went head-to-head on this week's Knockout Rounds episode of The Voice, and former American Idol contestant Todrick Hall landed his own MTV show. Also? A member of Pentatonix has been getting love for his new Meghan Trainor cover video all over the place.

Speaking of videos: Fishboy premiered his new one on our site earlier today, and Jessie Frye and The Cush each released new ones this week as well. Similarly, War Party, Wesley Geiger, Party Static, Blue, the Misfit and Larry g(EE) each released new singles in the past week, and Mystery Skulls, Black Milk and Daniel Markham each released new LPs, too.

Elsewhere, Sam Lao kicked some tail the house at this month's Sound Select show, New Fumes and Def Rain appeared on the Flaming Lips' newly released Beatles tribute LP and Dorrough was one of 40-plus Texas rappers that performed at Gexa Energy Pavilion as part of last weekend's Texas rap Fest.